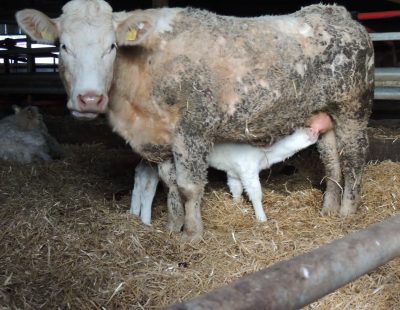 Always keep a barrier between you and a cow with a newborn calf. Photo: Ann Marie Foley

With Ireland having one of the worst records in Europe for fatal farm accidents, Bishop Denis Nulty of Kildare & Leighlin has called on the incoming coalition government to give greater priority to promoting safety in the agricultural sector.

According to Health and Safety Authority (HSA) figures, there were 18 fatal farm accidents last year making agriculture the most dangerous work sector in Ireland. Indeed, per head of population, Ireland has the third-worst record for farm fatalities in Europe, after Malta and Austria.

An ecumenical service of remembrance was organised by Embrace Farm, a bereavement-counselling charity founded by the family of champion ploughman Liam Rohan, who died following an accident while repairing farm machinery in 2013. Now in its seventh year, yesterday was the first time the prayer service was broadcast by RTÉ.

In his homily, in addition to reflecting on the high level of fatalities in farming, Bishop Nulty also spoke of the high rate of non-fatal, but extremely serious and life-changing, accidents that occur all too often in the agricultural sector.

The bishop noted that the Farmers Journal daily news app features a strapline ‘Farming never stops’ and he said that lack of pause may be part of the problem.

“Someone is in a hurry and doesn’t carry out the normal checks and balances before beginning a task; someone else is reversing and is distracted by a mobile ringing and someone else climbs into, steps into, walks into a situation that too quickly gets beyond their control,” he said.

“We are told that the old and young are exceptionally vulnerable to death and injury on our farms. Between 2010-2019, tractors or vehicles accounted for 31 per cent of deaths; followed by livestock and machinery. When we drill down into the danger livestock pose on the local farm, it is surprisingly the cow or the young heifer who poses the greatest threat, accounting for 56 per cent of all fatalities from 2010-2019.”

Because of the predominance of livestock as a cause of farm injuries and deaths, the HSA organised a ‘safety blitz’ that focused on livestock handling at the start of this year’s calving season.

Six of the 18 farm deaths recorded last year involved livestock. Each of these six livestock-related deaths involved cattle. Pat Griffin, a senior inspector for agricultural safety with the HSA, cautions: “There’s no such thing as a quiet cow – any cow can attack and a cow around calving time is one of the most dangerous animals you could deal with on a farm. The mother is extra protective and can launch an attack in a split second if she thinks her calf is threatened or being taken away.

Nearly one in ten of all farm fatalities involve children, and Bishop Nulty noted that because of COVID-19 and the requirement to ‘stay at home’ the children of farming families are especially at risk. “The closure of schools and lockdown of the economy has meant that there are more people than usual around the farm,” he said. “These are the times we must all be more vigilant. Vehicles – tractors, quads, teleporters – are particularly of concern.

“The new government just appointed needs to prioritise a system where the agricultural agenda will be set, not just around the concept of ‘farm to fork’ or the tackling of carbon emissions while improving biodiversity, but by incentivising farmers to make safety a priority. Our farms are being depopulated as younger people are attracted to cities, towns and off-farm occupations. A prioritised safety agenda helps keep people on the land, on the farm.

“Like the daily figure count in the COVID-19 pandemic, each fatality on a farm is much more than a number, than a statistic. It’s a family decimated; it’s a spouse’s heart-wrenching tears; it’s a parent’s worst nightmare.”