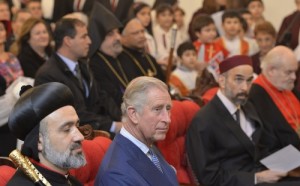 The Prince of Wales has expressed his concern over the plight of Christians in the Middle East and the attacks on them by militant Islamists.

In an address to faith leaders, including Archbishop Vincent Nichols of Westminster and the Archbishop of Canterbury, Dr Justin Welby, Prince Charles observed that the Middle East and North Africa have the lowest concentration of Christians in the world – just four per cent of the population.

“It is clear that the Christian population of the Middle East has dropped dramatically over the last century and is falling still further,” he warned.

“This has an effect on all of us, although, of course, primarily on those Christians who can no longer continue to live in the Middle East: we all lose something immensely and irreplaceably precious when such a rich tradition dating back two thousand years begins to disappear.”

Acknowledging the “particularly acute circumstances faced by church communities in the Middle East today”, the Prince said he felt it worthwhile to draw attention to their current plight.

He suggested that the decline of Christians in the region represents “a major blow to peace as Christians are part of the fabric of society, often acting as bridge-builders between other communities.”

This crucial role throughout Middle Eastern society is one recognised by many Muslims (who are not extremists), both Shia or Sunni, who attest to the fact that Christians are their friends and that their communities are needed, Prince Charles said in his address in Clarence House before Christmas.

He called upon Christians, Muslims and Jews to unite in “outrage” over deliberate attacks on Christianity in the Middle East by fundamentalist Islamist militants.

“For 20 years, I have tried to build bridges between Islam and Christianity and to dispel ignorance and misunderstanding,” the Prince explained.

However, he warned that “a crisis” had now been reached where the “bridges are rapidly being deliberately destroyed by those with a vested interest in doing so, and this is achieved through intimidation, false accusation and organised persecution, including to Christian communities in the Middle East at this present time,” Prince Charles said.

He warned that the world is in danger of losing something “irreplaceably precious” as communities that trace their history back to the time of Jesus are threatened.

Elsewhere in his address, he cited Jordan as having set “a wonderful example in this regard” which he and his wife had seen for themselves during their visit to the country earlier last year.

Jordan has again taken in a huge number of refugees, this time from Syria during the present troubles and, moreover, is, as I have alluded to earlier, under His Majesty King Abdullah II’s leadership, “a most heartening and courageous witness to the fruitful tolerance and respect between faith communities.”

The Prince of Wales said it was now time to re-double the combined efforts to stress what binds the three Abrahamic faiths together and, as Christians, Jews and Muslims, to express outrage at what tears us asunder.

He said he believed that Western Christians ought to pray earnestly for fellow-believers in the Middle East.

Prince Charles’ full speech can be read at: http://www.princeofwales.gov.uk/media/speeches/speech-the-prince-of-wales-advent-reception-christians-the-middle-east