‘Ireland is still marked by a very strong family culture’ 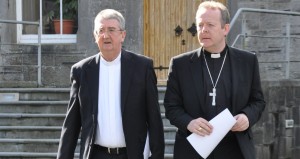 Ireland in the wake of the marriage referendum is still marked by a very strong family culture, Archbishop Diarmuid Martin of Dublin told the Synod of bishops in Rome in his most recent intervention.

The Archbishop suggested to the Synod Fathers that it was too simplistic to infer that an authentic Christian culture of marriage has disappeared in Ireland on the basis of the referendum outcome.

He told the gathering that the country is still marked by a very strong family culture.

“The numbers who get married – and who get married in Church – are high and divorce statistics are among the lowest in Europe. Families are strong and generous. That has not changed substantially,” he stated.

Elsewhere in his intervention, Archbishop Martin said he wished to speak about the social culture of marriage as that is the culture in which young people are grow up in and the culture which influences their understanding of almost every dimension of marriage and family life.

Often, he said, society uses the same words as the Church does, however with a radically different meaning.

“The referendum was debated within a social culture where people struggle to understand abstract moral principles. What they do understand is the predicament of individuals whom they wish to see happy and included.”

“It is a very individualistic culture, but not necessarily an uncaring one. Indeed those in favour of same-sex marriage based their campaign on what was traditionally our language: equality, compassion, respect and tolerance.”

He said young people today make their decisions on marriage and the family within the context of a flawed and antagonistic social culture.

But the Primate of Ireland warned that “It is, however, not enough to condemn that culture.” Instead he said the Church has to somehow evangelise that culture.

While the Synod is called to revitalise the Church’s pastoral concern for marriage and the family and to help believers to see family life as an itinerary of faith, Archbishop Martin warned that simply repeating doctrinal formulations alone will not bring the Gospel and the Good News of the Family into an antagonistic society.

He noted that even in within a flawed social culture of the family there are those who seek something more and we have to touch their hearts.

“What the Irish referendum showed was a breakdown between two languages. It showed also that when the demanding teaching of Jesus is presented in a way which appears to lack mercy, then we open the doors to a false language of cheap mercy.”

Separately, Archbishop Eamon Martin of Armagh in his intervention to the Synod of Bishops spoke about ‘tenderness’.

The Primate of All Ireland warned the Synod of bishops that in their deliberations “let us not forget families which have experienced the trauma of abuse and domestic violence, those for whom the proclamation of what we call the ‘Good News’ of the family may mean little or nothing”.

Noting that the Church is sometimes described as a family of families, he stated, “We know only too well the horrific impact of sins and crimes of abuse in the Church family: the betrayal of trust, the violation of dignity, the shame – both public and private, the anger and alienation, the wound that never seems to heal.”

He urged the bishops to reflect more openly these awful realities that afflict too many families today – families who ask: Where is God in all this? What of justice? Where do we find forgiveness? How does mercy and tenderness fit in – in the catechesis about ‘tenderness’ in paragraph 70 of the Instrumentum Laboris.

He said God’s loving kindness is beautifully portrayed in the image of the Father running out to embrace his Prodigal Son, – an image which St John Paul said ‘sums up all the best characteristics of fatherhood and motherhood’. What better icon for the ‘revolutionary tenderness’ of God, whose mercy knows no bounds, the Primate suggested.