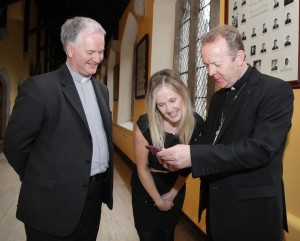 The Council Fathers could never have anticipated the transformations in technology witnessed over the past five decades, Archbishop Eamon Martin, chair of the Bishops’ Council for Communications, commented on Thursday.

In his address to open a conference marking the 40th anniversary of the Catholic Communications Office in Maynooth, the Primate of All Ireland said that the Council Fathers did point out prophetically that communication cannot simply be about the exchange of information and that communication is always ‘social’ – it is about the development of good human relations.

The Archbishop of Armagh said the Church has always been conscious that the most effective way to get its message across is through personal witness, one-to-one communication.

That was why much of its activity was about creating quiet moments for people amid the rush and tumble of everyday life – sacred spaces where God speaks in the silence.

“But the mission of the Church impels us to harness the best of new communications platforms as springboards for proclaiming the Good News in interaction with the world and society,” he said.

The other is ‘ad extra’ – how the Church gets its message out to others in the ‘secular’ media world, including those who already have their mind made up and their story more or less written.

Addressing a number of bishops, members of the media, as well as diocesan communications officers, the Archbishop said that over the past forty years much of the work of the Catholic Communications Office has been in supporting ‘ad intra’ communications.

This included building and supporting the network of diocesan communications officers; issuing press releases and bulletins from the episcopal conference meetings; supporting the communications needs of the various commissions and agencies of the Conference, and, at times, assisting bishops in their individual dioceses with responding to media queries and events.

He said many key aspects of the life of the bishops’ conference were highlighted down through the years in Intercom magazine, the bishops conference liturgical and pastoral resource. 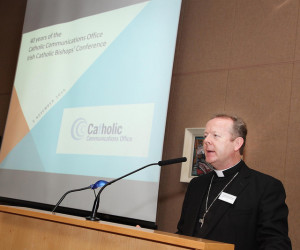 He drew attention to the launch of a new dedicated website for Intercom www.intercommagazine.ie on Thursday which will now allow subscribers to digitally access the magazine online on all mobile devices.

In time, it will also include a searchable digital archive for all historical copies of Intercom from 1974.

On the ‘ad extra’ dimension of the Church’s work in communications, Dr Martin said he was conscious that the relationship between the Church and the media had sometimes been “fraught” over the past forty years.

“At times we in the Church have reacted defensively, complaining of being unfairly targeted or singled out. Gradually we have come to accept that the media has played a vitally important role in lifting the lid on a terrible and shameful chapter in our history, giving a voice to many who had been carrying a lonely trauma for years, driving the development and implementation of better practice not only in the Church but throughout society”, he said about the clerical abuse scandals.

He also regretted that journalists, members of the Church and others with a public profile have had to stop using social media as they have become victims of vitriol and abuse and that aggressive behaviour and offensive language have contributed towards social media becoming a harsh and dehumanising environment for some.

“The sins of bearing false witness, defamation, detraction and calumny are no less grave just because they are committed behind the anonymity of a computer screen. They still destroy the dignity of another human person. When such negative communications emanate from sources purporting to be Catholic or Christian they are particularly reprehensible,” he criticised.

Recalling his experience at the Synod on the Family in Rome in October, Archbishop Martin said he was impressed by the depth and breadth of theological understanding of several of the religious affairs reporters and commentators who were in attendance.

“This is precisely the time when we need our journalists to have a well informed and comprehensive an understanding of religion as much as we might expect from those who write about politics, education, literature or science,” he said.

The Primate of All Ireland also suggested that St Patrick’s College Maynooth might develop a quality course or an elective in theology specifically tailored for those working in the Church communications and religious affairs.

In his keynote address, Dublin priest Monsignor Paul Tighe, who is secretary of the Vatican’s Pontifical Council for Social Communication in the Vatican, called on prelates and faithful to become “digital missionaries” as he compared the digital world to a new continent in need of evangelising.

Coverage of Mgr Paul Tighe’s address and Fr Tom Casey’s talk will be published on www.catholicireland.net on Saturday.