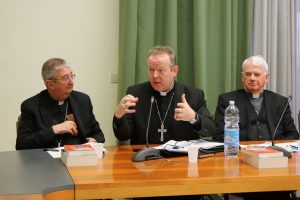 The Prefect of the Dicastery for Laity, Family and Life met the delegation of Irish bishops who are in Rome this week on their ad limina visit.

Dublin-born Cardinal Kevin Farrell welcomed members of the Irish Catholic Bishops’ Conference for their first visit to the new dicastery.

On Monday, the bishops also concelebrated Mass at St Peter’s tomb in St Peter’s Basilica in the Vatican.

The Primate of All Ireland, Archbishop Eamon Martin, was the main celebrant and he prayed “in a special way to strengthen” priests in Ireland.

In his homily, Archbishop Martin said the ministry and well-being of priests “is dear to all of us. We are aware that their smaller numbers, increased workload and ever more challenging pastoral situations has taken its toll on them. We thank God today for their resilience, dedication, and generosity, and for the kindness and support offered to them, and us, by our people and religious,” he said.

Archbishop Martin described the tomb of St Peter as “the goal of our pilgrimage ad limina apostolorum”.

“Here at the tomb of St Peter and surrounded by the tombs of the successors of Peter, there is no better place to enter into a prayer of communion with the one, holy Catholic and apostolic Church,” he said. 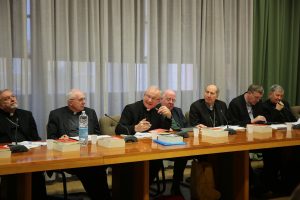 Bishops at the Dicastery for Laity, Family and Life.

He said the bishops were conscious of the pressures and “struggles which beset our people, the internal struggles that can disrupt harmony, the wolves which sometimes attack the flock, and the weighty responsibility for their care that has been laid on our shoulders.

“If it were left to us, of course, we know in our hearts that we would inevitably fail as shepherds – the flock would be scattered, communion shattered.”

He said one of the most moving lines in the Gospels for him is in Luke when the Lord predicts Peter’s denial but assures him: “Peter, I have prayed for you, that your faith may not fail; and when you have turned back, strengthen my brothers.”

The bishops ten-day ad limina visit will include a meeting with Pope Francis on Friday as well as with senior officials of the Holy See throughout the week.