Primate outlines vision for parishes and dioceses of the future 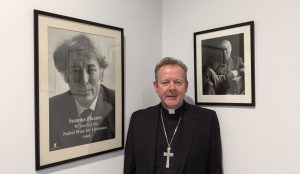 The Primate of All Ireland has called on the Church in Ireland to re-imagine the way parishes and dioceses function in the future.

In his address, ‘Growing Up In-Between – a conversation about parish and diocese’, which was delivered at poet Seamus Heaney’s birthplace in Bellaghy, Co Derry on Sunday, Archbishop Eamon Martin said he had visited parishes where he had experienced a strong sense of identity and community, connection and belonging.

However, he added, few would disagree that all forms of community have taken “a battering in a culture where individualism, personal autonomy and choice, are often paramount”.

Although social media links us in a great global network, it could still be “shallow and cosmetic, fleeting or superficial,” he warned.

Recalling his own episcopal motto and the Psalm, he said it was time for the Church to “sing a new song to the Lord”.

This presumed that the parish is in contact with the homes and the lives of its people, and does not become “a useless structure out of touch with people or a self-absorbed cluster made up of a chosen few”.

Archbishop Martin said it was difficult for him to understand the Church without thinking of belonging, family and connections.

Referring to Pope Francis, he noted that the Pontiff had described the Church as a ‘family of families’.

“The family in Catholic tradition is the ‘little church’ or domestic Church. Parish is a ‘family of families’ linked by faith, place, priest, land, tradition. Diocese is a family of parishes, and, in turn, the universal Church links dioceses through faith in ‘one Lord, one faith, one baptism and one God who is Father of all, with all, through all and within all (Eph 4:5)’,” he said.

He urged people to ask to what extent are our parishes living, worshipping ‘communities of the faithful’ (Canon 515) with a sense of belonging and connectedness. And to what extent is a parish a ‘community of communities’, a family of families?

“We are in a transition time between the relative security and certainties of past times and discovering what the Spirit wants of the Church in Ireland today and tomorrow.”

“It will be impossible for us to hold on to the ways we lived parish in the past. The parishes of tomorrow will be ‘communities of intentional disciples’ sustained by committed and formed lay people.”

The Archbishop of Armagh suggested that the key to this would be the formation of cells, or smaller gatherings of committed people who meet and pray and develop together their understanding of faith, and who find there the courage to engage in mission and outreach.

This might go a step further and a number of families might begin meeting together to pray, share their joys and struggles in faith, read the Word of God together, talk about their personal faith journey, discuss and study together aspects of faith, commit to mission, and then, on Sunday join together with similar cells or ‘families of families’ in the parish Sunday Eucharist.

He said something like this model was already being developed within the Neocatechumenal Way and in many of the new ecclesial movements that are springing up around Ireland.

“It will of course mean a certain amount of ‘letting go’ by priests and even bishops as the centre of gravity of life, worship and mission in the parish shifts from the parochial house or diocesan curia to the little domestic churches and gatherings of families on the ground.

“However, the dividend for such a divestment could be more energised, connected families approaching Sunday Eucharist as the summit of their week and as the source of nourishment and life for the week ahead,” the Primate of All Ireland suggested.

Coming back to the poet Seamus Heaney, the Archbishop acknowledged that all of this might seem a strange thought process for him to engage in at the home place of the great writer.

Explaining his reasoning, he said the more he read Heaney’s poetry the more he sensed Heaney’s deep understanding of how people are connected to one another by their locality and their shared sense of place, history and tradition.

“Heaney develops somewhat his understanding of this ‘connectedness’ in his final volume of poetry, Human Chain (2010). He certainly saw his home place as a liminal space or ‘aperture’ connecting him as a person to the world at large, to times past in Ancient Ireland, Rome or Greece, and even to the infinite and transcendent.”