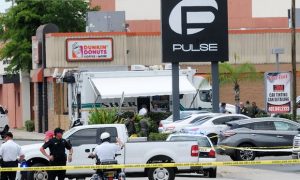 The leader of the Catholic Church in Ireland has added his voice to a host of international religious leaders who have expressed their shock and revulsion at the massacre in Orlando, Florida on Saturday night.

Yesterday evening, Archbishop Eamon Martin offered prayers for the 50 people killed and 53 injured in the Orlando shootings, which have been described as the worst terrorist incident in the United States since 9/11.

The gunman, 29-year-old Omar Mateen, was shot dead by police at the scene. His massacre at Pulse nightclub was claimed by ISIS on Sunday.

“Like many people across Ireland I have been greatly shocked and saddened when hearing of the shootings today in Orlando, Florida. Many Irish families enjoy visits to this beautiful and friendly place, and it is heart-breaking to hear about such a high number of people killed in violent circumstances,” Archbishop Martin said.

In his statement, the Archbishop said the taking of innocent human life is always wrong.

“On behalf of the Irish Catholic Bishops’ Conference I wish to express my profound condolences and I offer prayers of solidarity from Ireland to those who have been touched by this tragedy in the United States.”

He asked the faithful over the coming days to remember in their prayers, and at Mass, all those who have been injured or killed, and their families.

Meanwhile, Vatican spokesman, Fr Federico Lombardi, released a statement on behalf of Pope Francis in response to the shootings.

“The terrible massacre that has taken place in Orlando, with its dreadfully high number of innocent victims, has caused in Pope Francis, and in all of us, the deepest feelings of horror and condemnation, of pain and turmoil before this new manifestation of homicidal folly and senseless hatred,” the statement said.

“Pope Francis joins the families of the victims and all of the injured in prayer and in compassion,” it continued. “Sharing in their indescribable suffering he entrusts them to the Lord so they may find comfort.”

“We all hope that ways may be found, as soon as possible, to effectively identify and contrast the causes of such terrible and absurd violence which so deeply upsets the desire for peace of the American people and of the whole of humanity,” the statement concluded.

A number of bishops in the US have also reacted to the atrocity.

The President of the USCCB, Archbishop Joseph Kurtz of Louisville issued a statement on Sunday. He said the “unspeakable” violence in Orlando reminded people of how precious human life is.

He pledged prayers for the victims and their families affected by this “terrible act”.

Concluding, Archbishop Kurtz said the merciful love of Christ called people to “solidarity with the suffering and to ever greater resolve in protecting the life and dignity of every person”.