Home > Featured > Primate “nervous” of any reconstruction of the border

Primate “nervous” of any reconstruction of the border 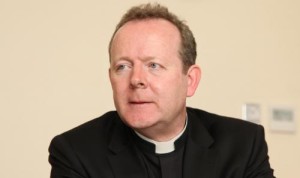 The Primate of All Ireland has admitted that the bishops are “a bit nervous about the impact that the reconstruction of a border wall could have on the peace process”.

In an interview with Vatican Insider, Archbishop Eamon Martin said the European Union’s principles of peace, reconciliation and harmony had shaped the peace process in Ireland.

Asked about the consequence of a return of a border in the wake of Britain’s vote for Brexit, he warned that the freedom of movement would be at stake.

“As one Church, we want to have assurances that the possibility to move between the North and the Republic will remain the same as today,” he said.

In addition to the uncertainty over Brexit across the island of Ireland, Northern Ireland is going to the polls on Thursday this week.

On 22 February, the North’s bishops issued a statement appealing to politicians to “reject the temptation to retreat into partisanship” at this time of growing divisions in political life locally and the negotiation of change in the UK’s status in the European Union.

In his interview with Vatican Insider, Archbishop Martin said the bishops wanted to “calm things down”, especially in view of the identity stigmatisation which has emerged in recent weeks and the return to anger.

“We want to say as bishops our firm ‘no’ to a harsh language and remind our politicians that their vocation is to work for the common good and exercise their leadership through the careful practice of compromise and agreement.”

He added that they were also warning politicians to be careful not to sacrifice the progress made in the past 20 years thanks to the Good Friday Agreement.

According to the Archbishop, the Church wants to be a peaceful voice of reconciliation amid the risk of returning to the old divisions that have inflamed the past.

Asked what he believed might happen after the elections, Archbishop Martin said he did not know.

“Maybe little will change: Westminster’s power devolution will continue while agreements will be reached in Brexit’s negotiations. It is certainly ‘not simple’ what is happening before the elections. However, what will happen after it is more important.”

“Our document aims at encouraging people to vote because the real danger is that such a tense climate might discourage the ‘good’ people from voting. We want them to vote because it is their right.”

The Primate of All Ireland also described the abortion debate as “open and ongoing in both parts of the country”.

The Church is due to address the Citizens’ Assembly in Dublin on the Constitution’s Eighth Amendment on 5 March.

Archbishop Martin told Vatican Insider, “We will reiterate what we previously stated on the Day for Life on 2 October: the Eighth Amendment is valuable because it invites us to – what Pope Francis calls ‘the revolution of tenderness’. He is telling us that the life of the unborn child is not something we can dispose of nor decide upon.”