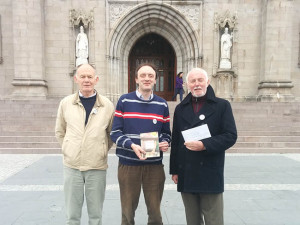 Delegation from pro-gay faith groups who met the Primate, Archbishop Eamon Martin in Armagh. (L to R) Jim O’Crowley from Gay Catholic Voice Ireland, Dr Richard O’Leary from Faith in Marriage Equality and Brendan Butler of We are Church Ireland.

The Primate of All Ireland, Archbishop Eamon Martin, held a meeting on Friday with a delegation from pro-gay faith groups in Armagh.

The meeting with the Archbishop was requested by Faith in Marriage Equality (FiME) during the recent referendum campaign on same sex marriage.

Jim O’Crowley, a gay Catholic, spoke to the Archbishop about the experiences and views of gay Catholics and their families.

The delegation had sent a copy of ‘To have and to Hold: stories and reflections of LGBT people, their families and friends’ (edited by Patricia Devlin and Brian Glennon) in advance to the Archbishop.

Brian Glennon is Catholic and in a gay relationship. He has two daughters and three grandchildren. He is a retired secondary teacher and a committee member of Gay Catholic Voice Ireland. He is also a spiritual director.

Patricia Devlin is a retired town planner. She is a married mother of four children and four grandchildren.

Archbishop Martin told the delegation that he found it helpful to read this book and to listen to accounts from gay Catholics.

Another member of the FiME delegation, Dr Richard O’Leary, is a sociologist of religion, and along with his late partner of 25 years, they were the first couple in January 2011 to have their UK civil partnership recognised by the Irish state. He is co-founder of the Church of Ireland group ‘Changing Attitude Ireland’.

He stressed to the Archbishop that a lack of affirmation of gay persons by the Churches contributed to the raised rate of suicide among gays, particularly gay men.

Brendan Butler of ‘We are Church Ireland’ referred to the forthcoming Synod of Bishops in Rome in October, at which Archbishop Eamon Martin and Archbishop Diarmuid Martin will represent the Irish Church.

Mr Butler highlighted paragraph 130 of the agenda of the Synod titled ‘Pastoral Attention towards Persons with Homosexual Tendencies’.

In his conversation with Archbishop Martin, Mr Butler stated that “If the Catholic Church is to regain credibility not only with the gay and lesbian community but also with the wider Catholic community then existing Catholic teaching needs to change”.

He drew attention to Paragraph 3 of the ‘ Letter to the Bishops of the Catholic Church on the pastoral care of homosexual persons’ (CDF 1986) as morally offensive as it describes “homosexual orientation as an objective disorder and ordered towards an intrinsic moral evil”.

The pro-gay faith delegation requested Archbishop Martin to consider this issue during his discussions at the Synod of Bishops in Rome.

Archbishop Martin said that he was open to receiving additional material from We Are Church Ireland on this subject.