Home > Featured > Primate hits out at Viganò for hijacking WMOF2018 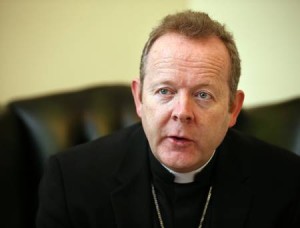 Archbishop Eamon Martin of Armagh has said the Irish Church is “extremely happy” with how the World Meeting of Families in Ireland went but he also said it “had been hijacked” by Archbishop Carlo Mario Viganò.

In an interview with Crux News, Archbishop Eamon Martin said he saw the WMOF2018 as a “tale of two congresses”.

“Essentially on the ground, it was an event of great joy and participation in the life of the Church. We got a great sense of a vibrant, dynamic Church, not just in Ireland, but indeed, the world,” he told Crux News.

“We were blessed to have so many visitors from around the world – families and young people milling about during the congress itself and then, of course, the wonderful Festival of Families and the closing Mass in Phoenix Park where Pope Francis, in a huge gesture of vulnerability, expressed his personal sorrow for the actions of the Church in terms of abuse. We had all of that, both a very moving and uplifting ecclesiastical experience.”

But there had also been “a huge concentration on the abuse issue”, which Dr Martin said “was merited” due to the reports from the US and elsewhere around the world.

Asked about the impact of Archbishop Viganò’s letter on 25 August, the Primate of All Ireland explained, “It was on the last day of the event and we were actually flying out to Knock, the national Marian Shrine of Ireland, and we became aware of the fact that overnight in the States this news had broken.

“I have to say, personally, I was very saddened. I was saddened that this was overshadowing what was otherwise a really important celebration of family and the importance of families in the new evangelisation of the faith. In some ways, I felt our World Meeting of Families had been hijacked in a way by this particular letter.”

He paid tribute to Pope Francis and the manner in which he had dealt with the controversy “very quietly and with great serenity”.

“You may remember that morning, when he arrived at the shrine in Knock, the first thing he did was he went into the shrine chapel and we had a full five minutes of silence where he was clearly, I imagine, placing this very grave situation at the feet of Our Lady and asking for her intercession and her guidance.”

On 25 August, Archbishop Viganò released an 11-page letter setting out a series of warnings he claims were made to the Vatican regarding Cardinal Theodore McCarrick.

In June 2018, when it was revealed that McCarrick had been accused of abusing a minor as well as harassing adult seminarians, he was sanctioned by Pope Francis and resigned as a cardinal.

Pending the outcome of a canonical trial, he was ordered not to celebrate Mass publicly and confined to a monastery.

Archbishop Viganò claimed in his letter that in 2007 he wrote a memo on McCarrick that led Pope Benedict XVI in 2009 or 2010 to place restrictions on McCarrick’s movements and public ministry, not allowing him to venture beyond the seminary grounds where he was living, and not permitting him to say Mass in public.

According to Viganò, Pope Francis removed these sanctions and made McCarrick “his trusted counsellor,” even though Francis “knew from at least 23 June 2013 that McCarrick was a serial predator.”

The letter’s “unsubstantiated allegations and personal attacks” have been described as “an extraordinary public declaration of war against Francis’ papacy”.

Cardinal Joseph Tobin of Newark released a statement in the wake of the letter criticising Viganò’s statement for “factual errors, innuendo and fearful ideology”.

Elsewhere in his interview with Crux News, Archbishop Eamon Martin said that what was “very beautiful” about Knock was the fact that the apparition of Our Lady was “quite unique – when she appeared at Knock she said nothing, she was silent before the lamb, before the altar, with the presence of St Joseph and St John.

“I felt Pope Francis was entering into that silent space of contemplation. No doubt within his mind was all of this stuff swirling around about the Viganò letter, but perhaps he was placing it all at the feet of Our Lady, the Queen of Ireland and asking for her protection and her intercession.”

Asked about the Synod of Bishops on Young People, the Faith, and Vocational Discernment, which the Archbishop is attending on behalf of the Irish Church, along Bishop Donal McKeown, he said he had the sense that all participants were focused on “the challenge of getting the word of God, getting the encounter with Jesus Christ out to our young people.

“I think we are together in realising the challenges and the concrete realities of the lives of our young people who are struggling before all sorts of contradictory messages, all sort of things pulling them this way and that, and we in the Church know that we have the answer, we know that we have the reason for hoping, the reason for living and that is Jesus Christ, but we just do not know how we get that message out there.”

His group, Archbishop Martin recounted, felt drawn to the story of John the Baptist where he says, “Look, there is the lamb of God.”