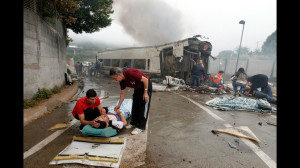 The Primate of All Ireland has extended the condolences of the Irish Church and the people of Ireland to the Archbishop of Santiago de Compostella following Wednesday’s rail tragedy which claimed 78 lives.

In his letter, Cardinal Sean Brady expressed his sympathy to Archbishop Julián Barrio Barrio, and offered prayers for those who died, those who were  injured as well as their families.

“The entire Catholic community here in Ireland is spiritually close to you and all who have been affected at this time and I assure you of our ongoing prayers,” he said in his letter.

“I pray through the intercession of Saint James, Apostle, that those who have been injured will be speedily restored to full health.”

Describing the region of Santiago de Compostella as a place that is “close to the hearts of many Irish people”, the Cardinal has urged Irish people who are currently on pilgrimage at home and beyond Ireland to offer their prayers for those who have died in this tragic accident.

He also invites the faithful to offer prayers at Masses this weekend in Ireland for all who have been affected in any way by the tragedy.

Meanwhile, the Spanish Prime Minister Mariano Rajoy has declared three days of official mourning for one of the worst rail disasters to have ever occurred in Spain.

The train derailed on Wednesday night on the outskirts of the Galician city of Santiago de Compostela, the end point on the ancient pilgrim trail, El Camino de Santiago.

According to the local health authority, 178 people were injured in the high-speed crash of whom 95 remain in hospital.

All festivities, including the traditional High Mass for the feastday of St James on Thursday at the Cathedral of Santiago de Compostela, have been cancelled in a gesture of mourning.

The Tánaiste, Eamon Gilmore, has also expressed his sympathies to the families of those killed and injured.

The famed shrine housed in the city’s Cathedral is believed to contain the remains of St James the Apostle, who is patron of Galicia.