Home > News > Primate calls for networks of support for the family

Primate calls for networks of support for the family 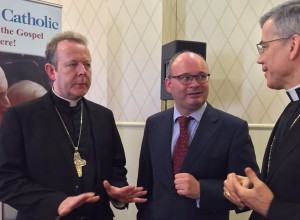 The Primate of All Ireland, Archbishop Eamon Martin, has urged the faithful to quiz politicians seeking their vote on whether their policies support family and life, freedom of education and conscience, a proper work-life balance, and respect the role of mothers and fathers.

In his keynote address to a conference on ‘Pope Francis and the Future of the Family in Ireland’ sponsored jointly by the Irish Catholic newspaper and the Iona Institute on Saturday, the Archbishop of Armagh said that over Christmas he found himself reflecting on how difficult it must be for young people preparing for marriage to hear the “still, small voice of faith amidst all the contradictory messages presented to them by the secular world”.

“The Church’s proclamation of the Good News about marriage and the family must compete with a tidal wave of individualism and instant gratification,” he stated.

He also noted that young people are bombarded by an overly emotional and romantic concept of love and marriage that, ‘can be constructed and modified at will’.

Elsewhere in his address, Archbishop Martin told up to 300 people who attended the conference there is pressure on young people to resist becoming ‘tied down’ by commitments, relationships or attachments – to delay or avoid lifelong commitments, including marriage and having children for as long as possible.

Employers expect them to be flexible, movable, able to travel and work long, unsocial hours.

“Young people can easily pick up a distrust of commitment and institutions, fearing that marriage and family may damage their social and economic independence and freedom,” he warned.

The Archbishop said that social media demands so much of their attention and time and the inappropriate use of the internet for gaming, gambling or watching pornography can put serious pressure on relationships.

“On the one hand they are surrounded by a contraceptive, anti-birth mentality with its increasing indifference to abortion, whilst on the other they are offered a technocratic, commodification of child-bearing which, if necessary, can be accessed independently of any sexual relationship.”

The Primate said that into this ‘soul-less world’ the Church has the joy and challenge of presenting its clear and positive vision of marriage.

“The presentation and proclamation of our challenging vision of marriage and family must be accompanied by support for those young people who are preparing to marry.”

Recalling how the Synod on the Family in Rome facilitated the sharing of initiatives, ideas and resources that are in place around the world to support the vocation to marriage and the family, the Archbishop said those attending the Synod heard of movements, associations, basic Christian communities and many other networks which guide and nourish the marriage and family ‘vocation’.

“Married people have this role with other couples and families in the Church by virtue of the sacrament that they have received. This is their charism, their vocation and mission.”

The Synod, the Archbishop said, reminded the faithful that remote preparation for marriage begins way back with parents as first teachers and with the transmission of the faith and Christian values in the family home.

It continues in Catholic schools through strong Relationships and Sexuality Education programmes in accordance with the Catholic ethos which explain and promote the virtue of chastity and the Catholic vision for marriage and the family.

“We have much to do in Ireland in developing learning and teaching resources to support our parents and schools in this regard and to prepare helpful catechetical resources for parents themselves, for parishes and youth.”

Elsewhere in his address, the Primate suggested it was timely for the Irish Church to evaluate with our committed ACCORD facilitators and others the ways in which our marriage preparation might be more directly linked with parish, with the worshipping community and with supportive couples and families within the parish.

“There is such a great need for the development at diocesan and parish level of leadership formation and support for family catechesis and spirituality,” he stated.

Dr Martin said Catholic family support groups in dioceses and parishes might not only assist with marriage preparation, but also with supporting couples in the years immediately following marriage.

“There is much that can be done to prevent Catholic families feeling isolated, to encourage openness to life and responsible parenthood.”

“To coin a ‘grown-up’ version of the Youth 2000 motto, these groups could become, ‘families leading families to the heart of the Church’. After all, what is ‘parish‘, if not a communion of ‘domestic churches‘ or families nurtured by Scripture, nourished by the sacraments and united into a community of faithful?”

In this regard it might be helpful for us to revisit and evaluate in Ireland the powerful 1983 ‘Charter of the Rights of the Family’ which remains prophetic and challenging for public policy makers today, the Archbishop said.

In under three years’ time Ireland will host the World Meeting of Families in Dublin, he underlined and said this exciting event provides us with a pastoral imperative to respond to the Pope Francis, the Synod on the Family and build a sure future for family in this country.

“The World Meeting of the Families is our catalyst towards mapping out a Mission to the Family in Ireland as the Locus of Mercy and Evangelisation and in promoting the vocation and mission of the family itself.”