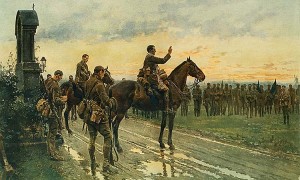 The diaries of a Dublin priest, who ministered to soldiers in World War I, will go on public display for the first time on Friday as part of the Archdiocese of Dublin’s exhibition for Culture Night (19 September).

Fr Francis Gleeson was chaplain to the Royal Munster Fusiliers in World War I as they faced battle on the Western Front.

He was the priest depicted in the famous painting, ‘The Last General Absolution of the Munsters at Rue du Bois’ by Fortuninon Matania.

He is seen mounted on a horse, giving absolution to the troops on the eve of the Battle of Aubers Ridge in May 1915.

He was often the only person in a position to communicate with families of soldiers and this Friday’s exhibition will include numerous correspondences between Fr Gleeson and the Irish families of men missing or killed in action.

As well as the Fr Gleeson diaries, a range of archival material on World War I will be presented, including documents on the ‘Tobacco Fund Appeal’ started by the Weekly Dispatch in 1914 and subscribed to by over 250,000 households.

The Appeal was launched to ensure that one parcel per week of smoking material was to every man on the front lines, who “love their weed as they do their country”!

There will be a visual presentation of artists’ insights into WWI including compelling works by Irish artist, William Orpen, as well as the previously mentioned Fortunina Matania’s portrait of Fr Gleeson and a painting of Irish troops under bombardment in Palestine.

There will be a live performance of the poetry of WWI by actor Margaret Ó Dálaigh, followed by a concert of popular songs of WWI, and a recital of Sacred Music led by the Dublin Diocesan Music Group.

Doors open at 6pm and admission is free.

Extract from the World War I Diary of Fr Francis Gleeson, Ascension Thursday, 13 May 1915:

“The roll call of the Munsters on Monday was the saddest thing imaginable. In the field beside St Mary’s (the little tent chapel the artillery chaps erected for us) the four Companies all sat around on the dry grass. One Company was called at a time. Everybody was worn, sad, depressed after the loss of so many loved comrades. Some had lost brothers, others cousins, but all had lost good and faithful companions. The Sergeant Major called out name after name. “Killed”, Wounded”, “Missing” was answered, according to the fate of each.”

Also to mark Culture Night, St Mary’s Pro-Cathedral will host a sacred music evening, beginning with Vespers, with the Boys of the Palestrina Choir at 5pm, followed by a sung Mass.

There will be an organ recital by Robbie Carroll, organ scholar, music from the St Mary’s Pro-Cathedral Girls’ Choir and later, contemporary sacred music from Sharon Lyons and friends and selections from Pergolesi, ‘Stabat Mater’ (boy’s voices).

The evening ends at 10pm with Compline, sung prayer of the Church, again with boy’s voices.