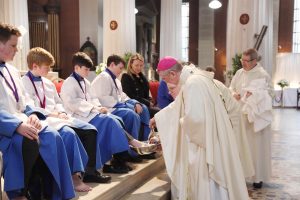 Archbishop Diarmuid Martin washing the feet of boys from the Palestrina Choir at the Solemn Mass of the Lord’s Supper in St Mary’s Pro Cathedral Dublin. Pic John Mc Elroy.

The number of priests is going down and the number of vocations is declining, Archbishop Diarmuid Martin of Dublin acknowledged in his Chrism homily at St Mary’s Pro Cathedral in Dublin.

Addressing representatives from the Archdiocese of Dublin’s 199 parishes, he said the challenges for priests are on the increase.

One challenge is the predicted population increase in Ireland. The largest concentration of this increase will be along the east coast of Ireland and especially in the greater Dublin area and the larger towns within the Dublin diocese.

“It is a daunting thought but with these demographic trends there is a clear sense that the strength of Catholicism and of belief in Jesus Christ in the Ireland of the tomorrow will depend to a great degree on us – clergy and laity – who form the Church in this large diocese today.”

He warned “We do not have the time to sit back in our old ways, or as cynical bystanders, or to dream of a time that will not return. We have to identify radical new ways of truly working together for mission and freeing priests to carry out their ministry effectively and with human fulfilment.”

In his homily, Archbishop Martin also referred to the strategies which he has been attempting to introduce in order to establish a strong pattern of working together between priests and laity.

These involve forging closer collaboration within parish groupings, strengthening the ministry of deacons, ensuring the sustainable future of the initiative of parish pastoral workers, and launching a new initiative of catechetical activity in parishes.

“This cooperation must be widely extended to involving lay people – especially women – in a real way in having responsibility within parish life,” he said.

Acknowledging that progress has been slow, he added that he felt strongly that despite everything “we have parishes today which have never been so vibrant at any other time in their history”.

The Archbishop said the priests – diocesan and religious – who work in parishes deserve unreserved gratitude for this.

The enthusiastic presence at the annual Chrism Mass of representatives of lay men and women who are actively involved in our parishes, he suggested, was a clear sign of the respect, admiration and affection in which they hold their priests.

“I have often said that if we were to carry out a survey of categories of people who are most respected in Irish society then ‘our local priest’ would be one category which would score very highly.”

Pastoral planning, the Archbishop said, needs discussion, debate and strategy, but it has an even greater need of prayer. “Ministry without a spirituality becomes merely activism,” he warned.

Separately, in St Aidan’s Cathedral Enniscorthy, the Bishop of Ferns said one of the biggest challenges facing the Irish Church at the moment is the shortage of candidates coming forward to priesthood and religious life.

In his Chrism homily, Bishop Denis Brennan said the “sharp decline in numbers studying for the priesthood obviously has huge implications for the future shape of ministry. It also impacts on the present by undermining and sapping our morale.”

He said the effect of this should not be underestimated.

“I know farmers and business people, who when they realise that none of the family are interested in continuing on the farm or in the business scale back, and even sell up. They lose heart, they see no point in continuing when it becomes obvious that nobody is going to come after them. This realisation can take its toll in priesthood and religious life too.”

Bishop Brennan referred to the many articles on subjects such as ‘The Last Priests in Ireland’ and ‘Priests under Pressure’.

“We see communities that always had a resident priest now being served from a distance by hard-pressed, hard-working priests, who are often getting on in years.”

Noting the massive cultural change in Ireland in recent years, Dr Brennan said the Church scandals have had an impact too.

“They have poisoned the well, but this cultural shift had begun before the scandals broke. They didn’t cause it but they certainly didn’t help, especially in the negative way they allowed priesthood and religious life to be portrayed.”

According to Bishop Brennan, the cumulative effect of all this is that many Church people are unsure about the future.

“In the face of this uncertainty we need to remember that we are not the first generation of Christians to be anxious about the future, to wonder what will happen to us, to the faith we cherish, and what we are called to do by God in the midst of our uncertainty.”

Separately, in the Diocese of Limerick, Bishop Brendan Leahy suggested that the Church needs to admit the wounds caused by those within it.

In his Chrism homily, the Bishop of Limerick said that while the Church has failed in many ways, it continues to deliver in so many other ways.

The Catholic Church, he suggested, can find “light and new directions” if it listens closely to why so many register as Catholics but don’t connect.

In his homily at the annual Chrism Mass at St John’s Cathedral, at which the oils for baptisms, confirmations, ordination of priests and the anointing of the sick are consecrated for the year ahead, the Bishop said that by admitting to the wounds of the Church and ensuring they are no longer inflicted, “we must continue to recognise the parts of it that are working well and doing great good.

“If we are honest, we have to acknowledge that the temptation to discouragement is real for many today. With the various headwinds buffeting the ship of the Church in recent times, including those blowing tragically from time to time, within the Church, it is no surprise that despondency has on occasions struck its arrow into our hearts.

“And yet, despite everything, we have discovered in recent days that 78% of our population still declare themselves Catholic. It’s a striking statistic. On the one hand, it is good news to hear that in the privacy of their own homes, 78% of our population have affirmed their Catholic identity. We can thank God for that. I doubt even the GAA has such a level of affiliation,” he said.

“We can be grateful too that also in our case, people come to the ‘big matches’ as it were – Christmas, funerals, major events. They keep in touch in various ways … And yet, we also know it [the census figure] does not at all correlate with the numbers that actually practise their faith in terms of attendance at Mass.”

He continued, “Before he left Ireland, the Papal Nuncio, Archbishop Charles Brown said there is still so much to play for in Ireland. Perhaps that’s why there is such a struggle going on. There is still so much faith. There is a deep spiritual vein in the Irish psyche. The ground is fertile for the seed to be sown in new ways and nurtured better than we have before.”