Home > Featured > “Priests are terrified” of being falsely accused of abuse 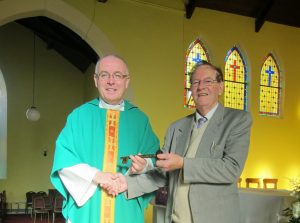 The parish priest of Killeagh in Co. Cork has said priests in Ireland today are “living in fear” of false accusations of abuse.

In an interview with Independent.ie, Fr Tim Hazelwood explained that he joined the Association of Catholic Priests (ACP) after he was falsely accused of child abuse and got no support from church officials.

He also spoke about the toll the episode took on his mental health.

“I’d seven years of hell and some of the policies that exist aren’t very priest-friendly; you’re presumed guilty and priests are terrified,” he said.

“I got no support, nobody official from the Church came to see me or to ask how I was getting on; in some ways I felt they actually put stumbling blocks in my way,” he chided.

He said he got involved with the ACP because it is vital for a priest to have a support network, otherwise “you’re on your own, you’re isolated, and because we don’t have immediate families with us it’s much worse.”

In 2009 he was informed that an anonymous complaint about child abuse had been made against him to his diocese. Even though the claimant never came forward, the complaint was forwarded to the HSE and the Gardaí.

According to Fr Hazelwood, his accuser proceeded to send anonymous letters and make threatening phone calls to him. When Fr Hazelwood discovered who the complainant was, he made a complaint to the Gardaí.

A criminal case against the man was not pursued and the priest opted to take a civil case in the High Court. In 2016 his accuser admitted making the false accusation and made a contribution to charity.

The Cork priest, who is in his late 50s, said that as a trained psychotherapist he understood the value of getting help, but that many priests don’t.

“I couldn’t sleep and was on sleeping tablets. It wasn’t easy, though, it was the worst few years of my life.”

He is now on the leadership team for the ACP and warned that many of the organisation’s members are worried about their mental health.

Even though the average age of a priest is now 70, their workload is increasing.

“For example, I’m in a parish where there used to be two priests and now I’m on my own. So you have an ageing group of men and their workload is pretty big; we are all looking to the future.”

He also said that he feels that members of the public, including women, should be given a greater role in the Church.

“I think the reality is that God is leading us in a different direction but I think as a church we are resisting. We have to accept that the old way is gone,” Fr Hazelwood said.

“We have to be open and allow lay people to take over some of the roles and functions that priests do. Also, if it wasn’t for the women in my parish it would probably close down.

“Pope Francis is looking into ordaining women as deacons and in today’s world I think women should be given a strong, leadership role, which they are denied – it’s giving off a very bad message.”