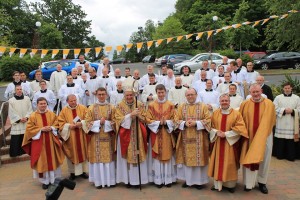 Fr Conor McCarthy following his ordination for service in the diocese of Down and Connor by Bishop Anthony Farquhar.

Four new priests were ordained for the Irish Church over the weekend in the dioceses of Down & Connor, Meath, Ossory and Raphoe.

Reverend Conor McCarthy (27) from Finaghy, who will service in the diocese of Down and Connor, was ordained in St Anne’s parish, Derriaghy by Bishop Anthony Farquhar.

A graduate of Queen’s University Belfast, Fr McCarthy was accepted to study for the priesthood in 2009 and entered St Malachy’s seminary in Belfast that year.

In 2011, he went to the Pontifical Irish College in Rome and studied Theology in the Angelicum University at bachelor’s level and progressed to a postgraduate, specialising in Moral Theology.

He was ordained as a deacon at the Irish College in Rome in April 2014 and he celebrated his first Mass in St Anne’s on Monday night.

There are four theology students from Down and Connor currently studying at St Patrick’s College, Maynooth and a further four are studying philosophy at St Malachy’s seminary in Belfast. 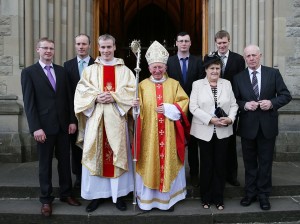 Fr Brendan Ward who was ordained for service in the Diocese of Raphoe by Bishop Philip Boyce.

Originally from the Gaeltacht Lar, near Fintown, Fr Ward was ordained at St Eunan’s Cathedral in Letterkenny.

He celebrated his first Mass at the Church of the Holy Family, Edeninfagh, Glenties on Monday evening.

Meanwhile, at St Mary’s Cathedral in Kilkenny on Sunday, Bishop Seamus Freeman ordained Fr Brian Griffin for service in the diocese, the first ordination in Ossory for 14 years.

During his homily Bishop Freeman spoke of the life of service of the priest and he challenged the young priest to be a good teacher and a model of the faith he preaches throughout his life.

Fr Brian Griffin from the parish of Slieverue who was ordained to the priesthood by Bishop Seamus Freeman on Sunday.

Bishop Freeman concluded by noting that it was fourteen years since the last ordination in Ossory and that the diocese could not wait another fourteen years for the next one and still be able to serve the people of Ossory as it does now.

He encouraged all those present to support people, especially young people, in living out their faith so that some of them too might respond generously to the call to priesthood someday.

Speaking after his ordination Fr McGivney said, “I’ve been heartened and humbled by the good wishes and support of so many people from near and far. It has been fantastic, wonderful and I’m so blessed and so encouraged as I start out on this road of service of God and his people. For the last number of weeks, the excitement and buzz around the town has been palpable. I’m just so thankful to so many people”. 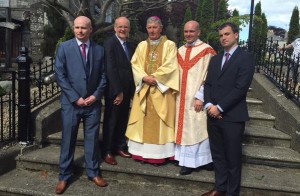 Fr Robert McGivney who was ordained by Bishop Michael Smith in Navan.

He began his seminary studies and formal discernment process in 2009 and has just qualified in his studies of Theology from St Patrick’s College, Maynooth.

Fr Robert has a huge interest in music, being a member of the Irish National Foresters Band in Navan, and he studied Sacred Music during his time in Maynooth as well.

During his studies, Robert took the opportunity to work with the Missionaries of Charity in Calcutta in the summer 2012 which he described as a “life changing experience”.

Along with that he has worked in parishes in the United States and undertook an intensive chaplaincy ministry course in Wisconsin in 2013.

He was ordained a deacon last year in Maynooth College, and has assisted in many parishes of the diocese, particularly in Navan and Dunboyne.

These four ordinations are part of the cohort of 15 ordinations to priesthood this summer in the Irish Church.