Killing of priest in Mexico linked to drug cartels 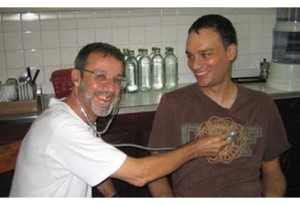 Fr Parolari Piero who was critically wounded in Bangladesh on Wednesday.

The body of a Mexican priest who had been missing has been discovered on a country road in the Mexican state of Puebla.

The discovery of the remains of Fr Erasmo Pliego de Jesus in Nopalucan brings the number of Mexican priests murdered since 2013 to eleven.

An investigation into the killing is underway.

Police are reported to be focusing their attention on drug-trafficking cartels and criminal gangs that have targeted priests who oppose their activities.

Separately, an Italian missionary priest who was wounded in a gun attack on Wednesday in Bangladesh remains in a critical condition.

Fr Parolari Piero was shot by assailants in northern Bangladesh as he was on his way to the hospital where he was serving as a doctor.

The three assailants were on a motorbike when they targeted Fr Parolari in the town of Dinajpur.

The 57-year-old priest, who is a doctor at St Vincent’s hospital and a PIME (Pontifical Institute for Foreign Missions) missionary, was hit in the neck by a bullet. The attack left him in a critical condition.

After undergoing an emergency operation, doctors decided to move him to Dhaka by helicopter.

Local police said they were not sure about the identity of the attackers, but there are suggestions that they are radical Muslims.

The Bishop of Dinajpur, Mgr Sebastian Tudu, told police “It is unacceptable that our people become such easy targets. We need greater security measures.”

Bangladesh has been rocked by a series of attacks this year claimed by Islamic extremists, including the killings of bloggers and, more recently, of two foreigners, an Italian aid worker and a Japanese agricultural worker.

A 24 October bomb attack on thousands of Shiite Muslims in Dhaka killed a teenage boy and injured more than 100 others.

The Islamic State group claimed responsibility for the two earlier attacks on foreigners, but the government said the extremist Sunni militant group does not have a presence in the country.

Fr Parolari had been in Bangladesh from more than 20 years. Trained in medicine, he had specialised in treating tuberculosis, while also serving as a pastor.