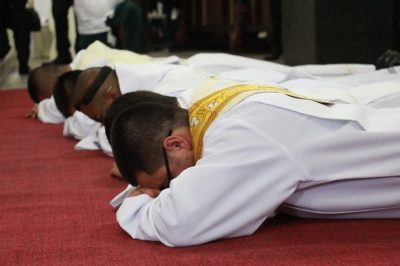 Young seminarians humble themselves before their ordination to the priesthood.

In recent years, as many as 350 new priests have been ordained annually in Poland representing 26 percent or one in four of the total number of priests ordained in Europe.

The Catholic Church continues to be very influential in Poland, with more than 90% of Poles declaring themselves to be Catholics.

According to data from the Polish Institute for Catholic Church Statistics, reported by La Croix International, the total number of ordinations in Europe was 1,272 in 2017, the last year for which data are available.

The total number of priestly ordinations worldwide in 2017 was 5,800.

Another major trend highlighted by the Polish Institute for Catholic Church Statistics is a rise in the number of those leaving the priesthood.

The statistics for female and male Catholic religious orders in Poland show a downward trend with the number of postulants in 2017 totalling 177 compared to 566 in 2000 and 251 in 2009.

According to Sr Jolanta Olech SJK, secretary general of the Conference of Major Superiors of Female Religious Orders, the trend “has the hallmarks of a crisis”.

“We have often wondered why we do not attract more,” she said. “Certainly part of the reason for the fall in vocations is demography, cultural changes and a decline in faith, especially among the young. But perhaps we should also look at ourselves… Perhaps it should be an incentive to us to, as Pope Francis says, go into the margins…and look for those who nobody looks for.”

A 2018 survey by Pew Research showed that church attendance among the younger generation compared to the older generation is falling in Poland at the fastest rate in the world.

However, the downward trend does not appear to be affecting monastic orders to the same degree. In 2017, there were 487 postulants and novices in Poland.

According to Fr Janusz Sok, head of the Conference of Major Superiors of Male Orders, this is more a “return to the situation from the past” than “a catastrophic crisis”.