Home > News > ‘Priesthood must not be treated as a job’: Pope

‘Priesthood must not be treated as a job’: Pope 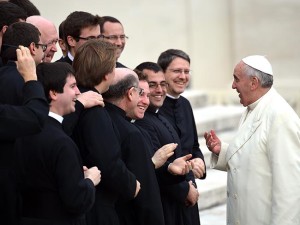 Pope Francis has warned priests that they must not treat the priesthood like a job and have a completely different kind of lifestyle when not ministering to their flock.

On Friday, the Pontiff addressed a conference sponsored by the Congregation for the Clergy marking the fiftieth anniversary of the proclamation of the Vatican II decrees Presbyterorum ordinis [the Decree on the Ministry and Life of Priests] and Optatam Totius [the Decree on Priestly Training].

He told delegates attending the conference, “We are not priests for our own sake, and our sanctification is closely linked to that of our people, our anointing to their anointing.”

He added that priests should be “authoritative, not authoritarian; firm, but not hard; joyful, but not superficial…in short, shepherds, not functionaries.”

“The good that priests can do comes primarily from their proximity to – and a tender love for – their people. They are not philanthropists or functionaries, but fathers and brothers.”

Pope Francis focused on three phrases found in a passage of Presbyterorum ordinis, stating that priests are “taken from among men,” “ordained for men,” and “live in the midst of other men.”

“Even priests have a biography, and are not ‘mushrooms’ which sprout up suddenly at the Cathedral on their day of ordination,” the Pope emphasised.

“It is important for formators and the priests themselves to remember this, and know how to take this personal history into account along the formation path.”

Underlining that seminaries should choose seminarians carefully, the Pope said some priestly hopefuls are men with psychiatric problems looking for a protective structure.

“There are young men who are psychologically ill and are looking for strong structures to protect them,” the pope told the Congregation for the Clergy. These include “the police force, the army and the clergy,” he said.

The Pope also urged bishops to remain close to to their priests.

He added the “fundamental place” of the human formation of the priesthood is the family, which Is the “centre of pastoral work” and can do much to foster vocations

“A good priest is first of all a man with his own humanity, who knows his own history – with its treasures and wounds – and has learned to make peace with it, gaining a profound serenity, characteristic of a disciple of the Lord,” he said.

“Human formation is therefore needed for priests, so they may learn not to be dominated by their limits, but rather to put their talents to use.”

A priest, he observed, is “a man of peace” who surrounds himself with serenity, even during hardships.

“It is not normal for a priest to be often sad, nervous, or of a hard character; it is not good, and does no good, neither for the priest nor for his people,” he said.

He reminded priests they are called “to serve our brothers and sisters.”