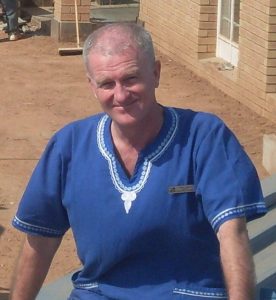 A Belfast-born missionary priest who survived a shooting in South Africa almost ten years ago is to take up a post in his native Belfast.

Ordained a Passionist priest in 1993, Fr Kieran Creagh CP was shot three times in February 2007 during a violent robbery on his home, which is attached to the Leratong AIDS hospice he established in the township of Atteridgeville in 2004.

The popular priest was the first person in Africa to be injected with a trial HIV vaccine and was named Irish International Personality of the Year in 2004.

After the shooting, Fr Creagh spent several months at home recuperating, only to return to South Africa towards the end of 2007.

Months later two of his attackers were convicted of his attempted murder and jailed for 25 years.

The brutal attack attracted international attention and Fr Creagh’s story has since spread around the world, with his life’s work currently being ghost written by an English biographer.

Fr Creagh later suffered post-traumatic stress after the attack and later moved back to Ireland to live on Tory Island in Co Donegal.

Last week it was announced that Fr Creagh’s fellow Passionist, Fr Gary Donegan CP, is to leave his post as Rector of Holycross and move to Tobar Mhuire retreat in Crossgar in Co Down.

He will be replaced by his current deputy, Fr Eugene McCarthy CP, whose role of assistant superior and bursar will be filled by Fr Creagh.

Speaking about Fr Creagh, Fr Gary Donegan told the Irish News, “I wish Fr Kieran every success in his new role. He is a native of Ardoyne and he is coming home as it were and I wish him every happiness and if he gets only a modicum of the joy and fulfilment I got working in Ardoyne he will be a lucky guy.”

He added, “He is a very strong character and not short of courage and will not be a guy that will shy away from responsibility and he is a hard worker.”

The changes will take affect later this month.