Home > News > Priest to do run to raise awareness of trafficking

Priest to do run to raise awareness of trafficking 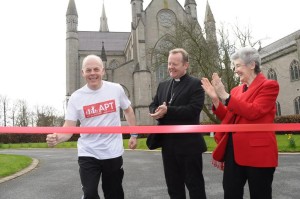 The Primate of All Ireland has appealed for support for a Dundalk priest who will undertake a four-day cross-border run to raise awareness of modern day trafficking.

Fr Gerry Campbell, parish priest of Kilkerley in Dundalk, will undertake a diocesan run – starting from the Bann and going to the River Boyne over the four days of 26, 27, 28 and 29 April.

A native of Magherafelt in Co Derry, Fr Campbell is no stranger to running the length of the Archdiocese of Armagh.

His first diocesan walk/run was in 2013 when a team of runners and walkers joined him at various parts of the archdiocese to raise funds for Irish Society for the Prevention of Cruelty to Children.

Last year he ran the same route in support of the Trócaire’s 2014 Lenten Campaign which highlighted the global water crisis.

Welcoming the priest’s initiative, Archbishop Eamon Martin said, “In recent days the large scale loss of life in the Mediterranean Sea has once again highlighted human trafficking as a real and present problem which needs be addressed locally, nationally and internationally.”

“As a start we need a personal awareness of what trafficking is, and how it can be prevented.”

“I warmly welcome Fr Gerry’s initiative which seeks to raise public awareness about this form of human exploitation and aggressive family displacement.”

The Primate asked the faithful to remember in their prayers all people who have experienced trafficking, and he also invited them to come out and support Fr Gerry on his route.

Earlier this year, Archbishop Martin proposed that a resolution for 2015 might be to raise awareness in order to tackle the global scandal of human trafficking.

Archbishop Martin proposed that the faithful might ask themselves and their public representatives:

–          what are we doing to actively make Ireland the land of one thousand welcomes and a cold place for human traffickers?

Meanwhile, today sees the launch of the ‘We Don’t Buy It’ campaign, the first all-Ireland campaign asking men and boys to make a stand against sex trafficking and prostitution.

Results of a new poll on attitudes to prostitution, carried out by Red C, will be presented at the launch of this campaign.

‘We Don’t Buy It’ will focus on the fact that most men across Ireland never buy and never will buy sex.

It will explore the reality of prostitution and sex trafficking across Ireland and across the border, which is highly organised, highly profitable for criminal gangs and largely hidden indoors.

It will also focus on the myths and the rationalisations that allow it to continue.

This campaign is part of The REACH Project which is funded by the European Commission. It aims to raise awareness of trafficking as a form of violence against women and girls.

Other partners include the HSE Women’s Health Project, An Garda Síochána, the Police Service of Northern Ireland, Tusla Child and Family Agency and Cosc.