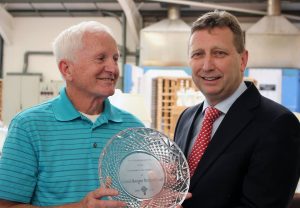 A United States-based priest received a very special gift for the 50th anniversary of his ordination to the priesthood.

Monsignor Martin McDonnell, who was born in Roscommon but now lives in New Jersey, was visiting the famous Belleek Pottery as part of a tour of Ireland with friends and parishioners.

While the group was there, the managing director of the Belleek Group, John Maguire, presented Msgr McDonnell with a specially engraved Galway Crystal plate.

The inscription read: “The 50th anniversary of the ordination to the priesthood of Reverend Monsignor Martin McDonnell, 1968-2018.”

Galway Crystal is a sister company of Belleek Pottery. The company’s American representative, Ed Hansberry, on the request of the parishioners and friends, had arranged for the engraved plate to be presented to Msgr McDonnell at the Co Fermanagh pottery company premises.

Fergus Cleary, head of design at Belleek Pottery, told CatholicIreland the gift was a surprise for Msgr McDonnell.

“They sprung this on him… Definitely it was a surprise for him. He was one of a group on tour and John Maguire met him in the kiln area as they were completing the tour and surprised him by presenting him with the plate.”

Msgr McDonnell retired in June 2016, but stayed on in the Paterson Diocese. Residing in Hopatcong, he still devotes much of his time to helping the sick in hospital ministry and offering spiritual counselling for people in hospice. 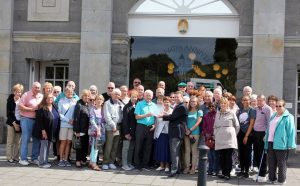 Msgr McDonnell and friends at Belleek

When he retired he said that he had “loved every minute” of his time as priest for the past 34 years.

“I love the priesthood and thank God every day for my vocation,” he said.

Msgr McDonnell travels to Ireland regularly to visit his family, including his brother John and his sister Nuala.

He received a master’s degree in theology and counselling in 1974 from New York Theological Seminary. Msgr McDonnell’s first assignment was at St Mary Parish, Denville. He served in five more parishes, ending up at Good Shepherd. He has served on the priests’ personnel board; as a member of the Presbyteral Council and the College of Consultors; as dean of the Eastern Morris Deanery; supervisor of the deacon internship programme; a member of Family Life Counselling; and a reflector for seminarians.

He was named a monsignor in 1998 by St Pope John Paul II.