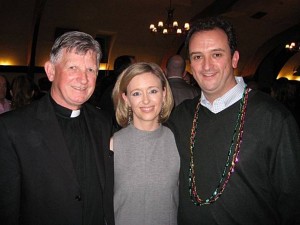 A Pastoral Centre in the United States which is run by an Irish-born priest has collected more than $500,000 to help the families of the Irish students killed or wounded in the Berkeley balcony tragedy.

Speaking this week, Fr Brendan McBride (72) said the funds will assist in paying for the treatment of the seven survivors as “they undergo a constant battle with insurers”.

Five Irish students and one Irish American student lost their lives in the tragedy when a balcony on which they were standing collapsed during a house party on 16 June last.

Of the seven survivors, three remain in the US receiving treatment. They are Aoife Beary, Niall Murray and Hannah Waters who will be returning home in the coming weeks.

Speaking about the tragedy, Fr McBride who is a native of Portnoo in Co Donegal said, “It was Aoife’s 21st birthday they had all been attending that night and she suffered a brain injury, but she is doing well.”

The Irish J-1 Berkeley Tragedy Fund was set up by the Irish Immigration Pastoral Centre in San Francisco which is run by Fr McBride since 1996 and he also serves as the President of the Irish Apostolate in the United States.

Speaking about the families of the injured he said, “We still have about $200,000 in the fund but we have made a promise to make sure we cover all their expenses while they are here. We have learned a lot from this whole tragedy. One of the biggest things we have learned is that anyone coming away should read the fine print of their insurance policy.”

Fr McBride explained that “there was, and still is, a constant battle with insurance. Even though it says that they are covered for eight, nine or ten million, it does not necessarily work out that way as the insurers want to get them back home as soon as they are fit to travel basically. They want to get them away. It was certainly an eye-opener for me.”

Meanwhile, it has been confirmed by the Department of Foreign Affairs that Fr McBride is one of ten recipients of this year’s ‘Presidential Distinguished Service Awards’.

He is being honoured for committing “his life’s work to serving the Irish community through advocacy and the provision of support services”, as well as his efforts on US immigration reform.

Making the announcement, the Foreign Affairs Minister Charlie Flanagan also acknowledged the huge role Fr McBride has played in providing support for those involved in the Berkeley accident.