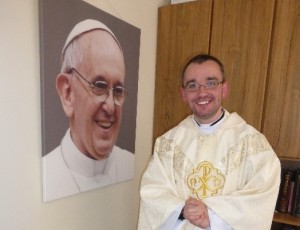 On Monday evening, Fr Michael Geraghty, the youngest and newest priest in the diocese of Killaloe celebrated his First Mass of Thanksgiving in St Brendan’s church Birr, Co Offaly.

Fr Geraghty was ordained to the priesthood in St Brendan’s on Sunday by Archbishop Kieran O’Reilly of Cashel & Emly.

He studied for the priesthood in St Patrick’s College, Maynooth, and served as a deacon in the parish of Nenagh in the Diocese of Killaloe.

A former student of St Brendan’s Community School in Birr, the young priest told the Midland Tribune he expects to receive a temporary appointment later in the summer.

But before that, he has a busy few months ahead helping out with the forthcoming diocesan pilgrimage to Lourdes and then a six week stint in Africa on missionary work.

Meanwhile, the diocese of Meath is preparing for the ordination of 28-year-old Rev Robert McGivney on Sunday, 28 June in St Mary’s Church in Navan by Bishop Michael Smith.

A native of Navan, Rev McGivney is the middle of two brothers, Joseph (29) and Shane (24). After finishing his secondary education in St Patrick’s Classical School in Navan, he completed a four-year degree in Mathematics in Trinity College, Dublin.

He began his seminary studies and formal discernment process in 2009 and has just qualified in his studies of Theology from St Patrick’s College, Maynooth.

During his studies, Rev Robert took the opportunity to work with the Daughters of Charity in Kolkata in the summer 2012 which he described as a “life changing experience”.

Along with that he has worked in parishes in the United States and undertook an intensive chaplaincy ministry course in Wisconsin in 2013.

He was ordained a deacon last year in Maynooth College, and has assisted in many parishes of the diocese, particularly in Navan and Dunboyne.