Home > Featured > Priest killed in Co. Roscommon hit-and-run to be buried on Thursday

Priest killed in Co. Roscommon hit-and-run to be buried on Thursday 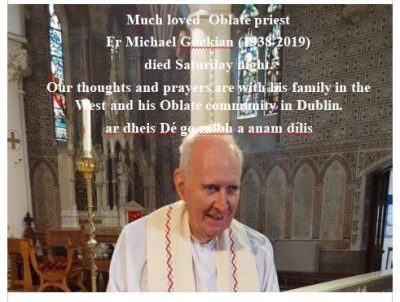 The funeral of Oblate priest Fr Michael Guckian, who was killed after he was struck by a car in Keadue, Co. Roscommon on Saturday night, will take place on Thursday.

The 81-year-old priest was walking on a country road when he was struck by a car.

The driver left the scene.

A passer-by who came upon the elderly priest contacted the emergency services. He was treated at the scene but was pronounced dead a short time later.

Based in the Oblate parish in Inchicore in Dublin, Fr Guckian had been in Co. Roscommon visiting relatives when the accident happened.

A former missionary, he served in the Philippines for 30 years.

Speaking to the Irish Independent, the priest’s niece described him as “a walking saint” who was down to earth.

A spokesman for the Oblates described Fr Guckian as “well liked and loved” and added, “he will be missed”.

He explained that the priest retired to Ireland in 1999 after he served in the Philippines as a missionary.

Fr Guckian’s remains will arrive at St Patrick’s Church, Drumboylan at 7 p.m. on Wednesday evening. Requiem Mass will take place on Thursday 16 May at 12 noon with burial afterwards in Kiltoghert Cemetery.

Mass will be offered at 7 p.m. on Friday 17 May in the Oblate Church of Mary Immaculate, Inchicore, Dublin.