Priest in Ireland says flooding in Kerala is severe 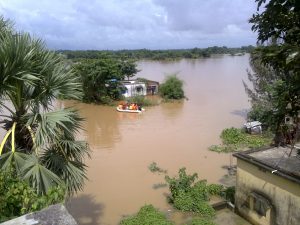 The families of priests and religious ministering in an Irish diocese and originally from Kerala in India are safe despite severe flooding and landslides in that state.

Fr George Augustine, CC Kilcock and Newtown Parish in Kildare, told CatholicIreland.net that some areas were badly hit with floods and landslides. However, his own region within the state of Kerala escaped the deluge this year.

“At home everyone is okay, but I heard from my friends that lots of people died, many lost their houses and their properties, everything was washed away in the water and the landslides,” he told CatholicIreland.net.

Fr Augustine, a former Benedictine who is now a priest of the Kildare and Leighlin Diocese, said that last year Kerala, including his own locality, was also hit badly by flooding. Parishioners in Kilcock and Newtown did fundraising and the thousands of euros raised in just two weeks were used to help a boy who lost his home, both of his parents and his brother – all his family – in the disaster. With help from the Irish parish, the boy got somewhere to live and will be able to get an education.

Three Indian Carmelites had taken charge of the busy White Abbey friary in Kildare town when the Irish Carmelites were unable to keep it going (see CatholicIreland.net 18 July 2016). Fr Augustine said that this year their families have escaped flood damage. However, last year they were very worried when floods hit.

“Last year their families were affected and were in refugee camps and they [the Carmelites] were tormented,” he said.

The first Prior of the Indian Carmelite community said that almost one-quarter of the population in Kerala is Christian. He and his colleagues come from the Latin Rite of the Catholic Church, although there are two other rites. There is no shortage of vocations in India, he said, and the Christians have the zeal of St Paul the Apostle.

Other priests have also come from India to work in the Diocese of Kildare and Leighlin. In September 2017 Bishop Nulty welcomed a visitor from India – Bishop Sebastian Thekethecheril from the Diocese of Vijayapuram, Kerala. At that time a priest from Bishop Sebastian’s diocese, Fr Alex Kochatt, was serving as a “Fidei Donum” priest (Gifts of Faith priest to serve for a three-year period in the diocese) in the parish of Naas, and he is still there.

With challenges in the diocese such as ageing priests and fewer vocations to the priesthood, Bishop Nulty has been inviting priests from other countries to minister in his diocese.

But this is not the only diocese to do so, as in May 2016 the Archdiocese of Tuam welcomed Fr Yesudas Kodiveetil, also from Kerala. That year Kimmage Development Studies Centre held its first Orientation Course for Incoming Pastoral Ministry Workers for 15 priests, sisters and brothers from Africa, Asia and South America, who were to work in pastoral ministry in rural and urban settings across Ireland.

When the floods struck in India Pope Francis sent condolences and prayers for the victims.

“Mindful of all those who have lost homes and livelihood, His Holiness Pope Francis sends his heartfelt condolences to the relatives of the deceased and injured,” Vatican Secretary of State, Cardinal Pietro Parolin, wrote in a telegram on behalf of the Pope. 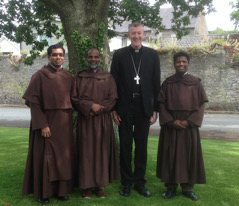 Bishop Nulty and the Indian Carmelites

The situation in Kerala is considered the worst, and that area was also severely affected one year ago when rain and floods killed 480 people.

As of Monday 12 August 2019, Kerala’s death toll stood at 85, while in Karnataka, Gujarat and Maharashtra, 116 people lost their lives. About 250,000 people were displaced in Kerala and are living in 1,600 relief camps that include church-run schools, hostels and even churches. Catholic Church agencies accommodated about 45,000 people in 300 such premises.

“We have opened all our institutions to accommodate needy people in temporary and safe accommodation,” said Father George Vettikattil, secretary and director of the Kerala Social Service Forum that coordinates the charity efforts of all the Catholic dioceses in the state through the local Social Service Societies.

Fr Vettikattil, who is also secretary of the Justice, Peace and Development Commission of the Kerala Catholic Bishops’ Council, explained that the 32 Catholic dioceses of Kerala cover 12 of the state’s 14 districts. Each diocese has a Social Service Society, which together with local Catholic institutions, parishes and organisations, have been involved in rescue and relief operations.

Fr Vettikattil also spoke about the Catholic fishing communities that have come out to help with their boats. During the floods last August, they rescued 65,000 from the floods. In the current crisis, they have been placed in different locations to help out in rescue operations.