Priest and two deacons ordained in Tuam and Dromore 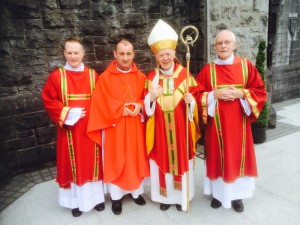 Archbishop Michael Neary of Tuam has played down the Association of Catholic Priests’ claims regarding the crisis in vocations in the Irish Church.

Speaking in Castlebar on Sunday following the ordination of Fr Seán Ryan at the Church of the Holy Rosary, Dr Neary said it was “a day of great joy and rejoicing”.

He said the shortage of priests was a “challenge” and noted that the word crisis in one eastern language also means opportunity.

“So I wouldn’t be despondent in any way. I am a person of indomitable hope because of the promise of Jesus Christ,” he said.

The archdiocese of Tuam currently has two men studying for the priesthood in Maynooth and Archbishop Neary said another four men were interested.

In his homily, the Archbishop said, “The vocational call to priesthood is profoundly countercultural because the primary dominating voices today stress doing one’s own thing.”

He continued, “Reading the signs accurately requires that the priest be a contemplative – receiving life, health, those around us, love, friendship as gift. Becoming a more grateful person is absolutely essential for a priestly ministry.”

According to the Archbishop, “The priest today must be an agent of hope in what often might seem a hopeless situation.”

He noted that they were working on behalf of the Lord and also represent the Church, a Church where there is weakness, compromise, luke-warmness, complacency and sin.

Yet it was within the Church that people have access to the scriptures, sacraments and pastoral care.

“When the sick, the anxious, the poor and the lonely come to us it is because we are Christ’s instruments,” he said.

Speaking about priesthood, Dr Neary said the life to which Fr Seán Flynn was committing himself could only be fully understood in the light of faith.

“As priests we cannot ignore the many warnings of the Bible about ‘bad shepherds’, who have no love for their sheep.”

He added that the suffering that is part of any leadership position in the Church today and the responsibility which it carries should bring humility.

The Catholic Church’s newest priest was formerly an undertaker in Castlebar before he began his studies for the priesthood in Valladolid in Spain. He later went to St Patrick’s College in Maynooth to study theology and philosophy.

Elsewhere on Sunday, Bishop John McAreavey of Dromore said in his homily at the ordination Mass of Deacons Brian Fitzpatrick and Colum Murphy in St Patrick and St Colman’s cathedral in Newry, “Always remember the example of the Good Shepherd who came not to be served but to serve, and to seek out and rescue those who were lost.”

“Let the doctrine you teach be true nourishment for the people of God. Let the example of your lives attract the followers of Christ, so that by word and example you may build up the house which is God’s Church,” the Bishop of Dromore urged.