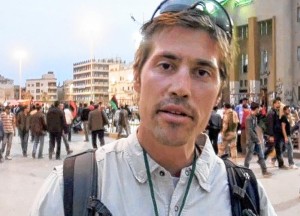 A gruesome video has been released by the Islamic State appearing to show American photo journalist James Wright Foley being beheaded by a masked militant.

Mr Foley went missing in Syria in November 2012 while working for the GlobalPost agency.

James Foley came from a Catholic family in Rochester, New Hampshire in the US.

On Tuesday, Fr Paul Gousse of Our Lady of the Holy Rosary, where the Foleys are parishioners, spent about 45 minutes at the house before leaving without speaking to reporters.

In 2011, Mr Foley was kidnapped and held by pro-Gaddafi forces in Tripoli, Libya, before being released after 45 days.

After his release he wrote an article for Marquette, the magazine of the Milwaukee university he attended, about how prayer helped him through his experience.

“I kept telling (my colleague) Clare my mom had a strong faith,” he wrote.

“I prayed she’d know I was OK. I prayed I could communicate through some cosmic reach of the universe to her. I began to pray the rosary. It was what my mother and grandmother would have prayed.  I said 10 Hail Marys between each ‘Our Father’. It took a long time, almost an hour to count 100 ‘Hail Marys’ off on my knuckles. And it helped to keep my mind focused.”

“Clare and I prayed together out loud. It felt energising to speak our weaknesses and hopes together, as if in a conversation with God, rather than silently and alone.”

After the Islamic State posted the video of Mr Foley’s murder online, with the killing carried out reportedly by a man with a British accent, Mr Foley’s mother, Diane, wrote on the Free James Foley Facebook page.

“We implore the kidnappers to spare the lives of the remaining hostages. Like Jim, they are innocents. They have no control over American government policy in Iraq, Syria or anywhere in the world. We thank Jim for all the joy he gave us. He was an extraordinary son, brother, journalist and person.”

After Mr Foley’s murder is shown in the online video, another man, thought to be another missing American journalist, Steven Joel Sotloff, is paraded on camera, with the militant saying, “The life of this American citizen, Obama, depends on your next decision.”

This warning comes after US airstrikes targeted Islamic State positions in northern Iraq.

British Foreign Secretary Philip Hammond told the BBC that although the video is yet to be authenticated, “all the hallmarks point to it being genuine”.

In reference to the fact that the killer appeared to have a British accent, he said “We’re absolutely aware that there are significant numbers of British nationals involved in terrible crimes, probably in the commission of atrocities, making jihad with (Islamic State) and other extremist organisations.”

“This is something we have been tracking and dealing with for many many months and I don’t think this video changes anything. It just heightens awareness of a situation which is very grave and which we’ve been working on for many months.”

Two US officials have confirmed anonymously that the man in the video is Mr Foley. President Obama is expected to comment later today.