Priest and 20 parishioners abducted in Syria 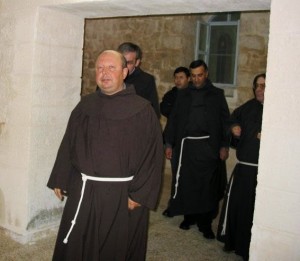 A Franciscan priest and 20 other Christians have been abducted by Islamist rebels in a village in northwestern Syria.

According to Bishop Georges Abou Khazen, the apostolic vicar of Aleppo, Fr Hanna Jallouf OFM, a Syrian parish priest in the village of Knayeh was kidnapped along with twenty parishioners by rebels linked to Jabhat Al-Nusra on Sunday night, 5 October.

The 62-year-old priest has worked for twelve years in Qunyeh, a village of several hundred people in Idlib province, some eight kms from the Turkish border.

Following the abduction, a number of Franciscan nuns sought refuge with the villagers.

According to Fr Pierbattista Pizzaballa from the Custos of the Holy Land, there is great concern over the fate of the priest.

“They are accusing them of being collaborators” with the Syrian regime of President Bashar al-Assad, he said, insisting that this was not true.

According to a source linked to the Franciscan Order in Aleppo, Al-Nusra rebels had forced their way into the convent and “looted everything”.

According to the news agency ANSA, a Franciscan Sister of the Immaculate Heart of Mary, Sr Patrizia Guarino, is among clerics living in the village of Knayeh,

The 80-year-old nun is reported safe and residing with a family in the village.

Fr Hanna Jallouf was one of two parish priests in the area of Knayeh, where some 700 Catholic families live.

Three Franciscan nuns, like the priests, also live in the village and are in charge of a youth centre and a dispensary. Among them is Sr Patrizia.

ANSA reports that up until last Christmas, Knayeh was under the control of ISIS militants, who had imposed a number of limitations on Christians, including the removal of crosses over churches, a ban on ringing church bells, covering statues and an obligation for women to cover up with the Islamic veil.

Then Islamic State jihadists then moved further east and were replaced by al Qaeda militants from Al Nusra. Recently, militants in charge of the village had seized Fr Jallouf’s passport.

The Franciscan Custody of the Holy Land confirmed that no information is currently available on where the hostages are being held and that attempts to contact the abductors and abductees have so far failed.