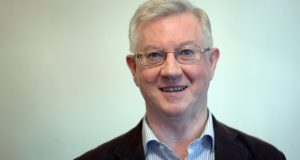 An Irish Jesuit priest has become the first ever person from this country to be elected to a leading British association for the study of spirituality.

Dr Michael O’Sullivan SJ has become the first ever Irish person to be elected to the Executive Board of the British Association for the Study of Spirituality (BASS), at its recent AGM in London.

Speaking about his appointment, he said “I am happy to accept the honour BASS has bestowed on me. They want me to develop their international profile, outreach, network, and impact. I see what I do as an expression of my Jesuit spirituality which calls me to read the signs of the times in the company of the Trinity and be a companion of Christ at the frontiers of change.”

A leading academic, Michael O’Sullivan SJ has served as Executive Director of SpIRE (the Spirituality Institute for Research and Education) and as a Research Fellow at the University of the Free State, South Africa.

He worked as a Jesuit missionary priest in Chile during the reign of General Pinochet and he has also worked in Central America and East Africa.

He lived for many years with Fr Peter McVerry and a few other Jesuits among socio-economically disadvantaged people in a tower block of flats in Ballymun, Dublin before it was demolished.

Having worked originally as a specialist in liberation theology, he has dedicated himself since the early years of this millennium to the development of spirituality as an applied academic discipline.

He currently serves on the inaugural International Relations Committee and Promotions Committee of the SSCS, the Leadership Board of the Centre for the Academic Study of Christian Spirituality at the University of Zurich, and the editorial board of Spiritus, the premier journal in its field.

For over ten years now, he has been running the leading international MA in Applied Spirituality.

One of Michael’s first tasks in his new role will be to help plan an international conference between BASS and the European Research Institute for Religion, Spirituality, and Health, which is based largely in Bern (Switzerland).

The conference will be held at the University of Coventry from 17 to 19 May 2018. His role will include deciding on speakers and which papers will be presented from the conference call for papers.