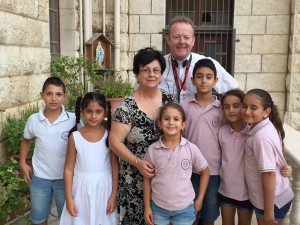 The Primate of All Ireland, Archbishop Eamon Martin, has joined the other presidents of the Bishops Conferences of Europe on a visit to the Holy Land to “express solidarity” with Christians and others suffering there.

At the invitation of His Beatitude Fouad Twal, Latin Patriarch of Jerusalem, the annual Plenary Assembly of the Council of European Episcopal Conferences (CCEE), is taking place there over six days and is due to conclude on Wednesday.

It is the first time in the CCEE’s history that a Plenary Assembly is taking place in the Holy Land.

It is also the first time in recent history that such a large number of high-level representatives of the European episcopate are meeting there at the same time.

In a tweet on Saturday, Archbishop Martin said that young people in Nazareth had asked the European delegation “to help them save their faith schools”.

Explaining the purpose of the meeting Mgr Duarte da Cunha, General Secretary of CCEE said, “The meeting is in fact a pilgrimage to the places where the Christian faith was born. From this land, Jesus’ disciples travelled throughout the world to bring the new message of Jesus.”

“The Gospel arrived in Europe having set out from this land, too! When Europe goes to the Holy Land, it is going, therefore, to the place of its Judaeo-Christian roots.”

“This area of the world has always been a crossroads of civilisation, permeated by great cultural differences and at times by strong social tensions which in the past have united and today still continue to bind Europe and the Middle East,” said Mgr Duarte da Cunha.

The Presidents will report on the situation in their own countries and discuss some of the common challenges.

As well as the various celebrations in the places such as Galilee, Capernaum, Magdala and a procession in the town of Mi’ilya to mark the Feast of the Exaltation of the Holy Cross, the bishops also participated in a prayer vigil for the family in the Basilica of the Annunciation in Nazareth on Saturday.

It was led by the Prefect of the Congregation for Bishops, Cardinal Marc Ouellet, preceded by a meeting of the bishops with Catholic families from the city.

On Tuesday, the bishops will visit the city of Bethlehem. There, they will speak to groups involved in different charitable works and institutions through which the Church is trying to be a neighbour to the most needy.

A number of male and female religious in Bethlehem are involved in this kind of ministry and the bishops will have the opportunity to listen to the testimony of the Carmelite Sisters and the Sisters of the Rosary about the life of the two new Palestinian Saints (Sr Maria Alfonsina and Sr Maria of Jesus Crucified), who were canonised on 17 May.

In Bethlehem, the Presidents will also meet the Custos of the Holy Land, the bishops of the Assembly of the Catholic Ordinaries of the Holy Land (ACOHL) and the representatives of other Christian denominations.

The Plenary Assembly will conclude on Wednesday 16 September with a celebration at the altar of the empty tomb of Jesus in the Basilica of the Holy Sepulchre.