Presidential hopeful says she was cured of eczema at Knock 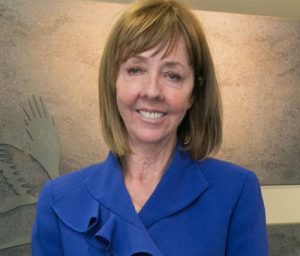 As a 16-year-old, Senator Joan Freeman went to the Marian shrine of Knock suffering with eczema on her hands. “They were so bad that when I flexed them at all, the skin would burst open,” she recounted, addressing the Novena in Knock in 2015.

“I placed my hands on the wall here in Knock on the shrine and I’ve never had eczema again,” she said. “Behind that cure was faith, it was the foundation of belief, of divine intervention and it became the cornerstone for the next 40 years of my life,” she continued.

In the same address, she told the story of how she came to found Pieta House. She had had a “very easy life”, she recounted. Happily married to husband Pat, with four children, she counselled people at Accord and then did general counselling, picking her own clients. “If anyone came who was suicidal or self harming I didn’t want anything to do with them. It is with great shame that I look back on those years.”

All this changed “overnight” when her sister, then aged 52, took her own life. “I come from a staunch, old-fashioned, Catholic family and we all believed that suicide would never come to our door.”

She searched the internet for answers, but it was a book about Our Lady – Your sorrow is my sorrow – that provided the “light bulb moment”,  in particular, the image of Michelangelo’s ‘Pieta’. “I realised we needed a living ‘Pieta’ in every community for the broken lives that are out there.”

Pieta House, the charity she founded to help people suffering suicidal ideation or engaging in self harm, has now helped over 30,000 people through its 12 centres across Ireland, its helpline and suicide bereavement counselling services, all of which are free to the public.

Around 270 therapists and administrative staff run the charity, which had an income last year of almost €10 million euro, with 90 per cent of its funds come from fundraising, and in particular the ‘Darkness into Light’ walk, in which almost 200,000 people participated last year.

From the start, Senator Freeman said she did not worry about finances. “I made Our Lord the financial manager of Pieta House and I’ve never once lost a night’s sleep thinking about money,” she told the Knock Novena.

While the senator is Catholic, according to a campaign spokesman she would not use her presidency to promote the Catholic faith. “Joan goes to Mass every week. She prays every day and describes herself as just one of the many different types of Catholics that make up the modern Irish Church. Joan’s faith has always been deeply personal to her and she makes no apologies for that,” the spokesman said, adding that the president “could not and must not promote the cause of any particular religion or faith.

“Joan believes that the president must serve and represent all of us. Joan Freeman’s faith has never spilled over into her roles as a mother, psychologist and senator, and it will not do so as president.”

Senator Freeman joins other presidential hopefuls, including outgoing President Michael D. Higgins and two businessmen and former ‘dragons’ Sean Gallagher and Gavin Duffy. Other candidates seeking nominations through the county councils are expected to be added to the ballot in the coming days. Sinn Féin says it will also put forward a candidate for the presidential vote, which will take place on Friday 26 October.