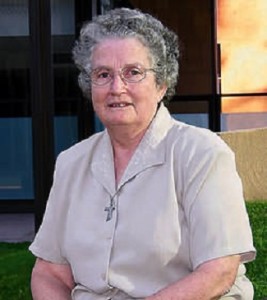 Irish missionary Sr Dr Miriam Duggan, who has spent most of her life in Africa as an obstetrician and more recently in the field of HIV/AIDS prevention and care, has been named as one of the recipients of the Presidential Distinguished Service Awards for 2015.

The Franciscan Missionary Sister for Africa joins actor Gabriel Byrne, solicitor Gareth Peirce and author Mario Vargas Llosa as a recipient of the honour, as well as Irish missionary Fr Donal Doyle who is based in Japan and Berkeley-based Fr Brendan McBride, who played a significant role in helping the families of the six students killed in the Berkeley balcony collapse contend with their loss and trauma.

On being told of the award, Sr Miriam responded, “I accept it on behalf of all the Sisters and dedicated laity who have worked with me all these years past. God has been good to me. It is nice to know that the government still recognises what Church people do.”

The Presidential Distinguished Service Awards recognises those who have served Ireland with distinction and those who have actively contributed to Ireland in a sustained manner.

President Michael D Higgins is due to present the awards on 4 December.

Fr Donal Doyle has lived and worked in Japan for over fifty years. He established an Irish Studies Programme at the prestigious Sophia University which encouraged students over many decades to visit Ireland thus making friends of Ireland of many hundreds of Japanese people who have now reached the upper levels of Japanese society, in business, administration and the arts.

Fr Brendan McBride is President of the Irish Apostolate in the United States. Originally from Donegal, he is also founder and head of the Irish Immigration and Pastoral Center in San Francisco and has committed his life’s work to serving the Irish community through advocacy and provision of support services and is one of the key leaders in the Irish community’s efforts to bring about immigration reform. Fr McBride played a central role in providing support to those involved in the recent Berkeley tragedy.

Limerick native, Sr Miriam Duggan is often referred to as ‘The Mother Teresa of Africa’.

She graduated from UCC with a degree in Medicine in 1964. She studied Obstetrics in Birmingham, receiving her MRCOG in 1969 and FRCOG in 1982.

She spent thirty years at St Francis’ Hospital, Nsambya, Kampala in Uganda, first as Head of Department and in later years as Medical Superintendent where she was also involved in the training of midwives and doctors.

In response to the HIV/AIDS pandemic which became manifest in 1987, when people were becoming sick and dying, she helped establish clinics, mobile home based care programmes to care for the many people ill with HIV/AIDS and to help the many orphans.

This prevention programme was very successful in Uganda in reducing the prevalence of HIV/AIDS, causing a cynical world to sit up and take notice.

The Programme has now been extended to 21 African countries. In 1998 she transferred to Southern Africa where she continued to establish care and prevention programmes.

Sr Miriam has received many awards for her work. She was honoured by Harvard University, Church of Uganda and the Templeton Foundation for pioneering behaviour based HIV prevention in 2006.

In 2008, she was presented with a recognition award from the President and Parliament of Uganda for her pioneering work in HIV/AIDS in that country.

Sr Miriam has also been involved in the Catholic Charismatic renewal and the Christian Doctors’ Guild. She is Congregational Leader of the Franciscan Missionary Sisters for Africa and was President of the Irish Missionary Union from 2004-2009.

She is presently working with Hands of Care & Hope in Nairobi assisting very poor children, out of school youth and women living with HIV.