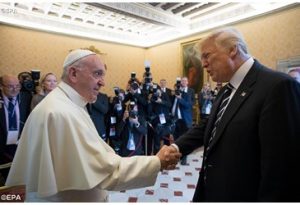 The issues of peace, interfaith dialogue and religious freedom were discussed by Pope Francis and US President Donald Trump when they met in the Vatican on Wednesday (24 May).

The Holy See Press Office said in a short statement: “During the cordial discussions, satisfaction was expressed for the good existing bilateral relations between the Holy See and the United States of America, as well as the joint commitment in favour of life, and freedom of worship and conscience.”

The statement continued that it is hoped that there may be “serene collaboration between the State and the Catholic Church in the United States, engaged in service to the people in the fields of healthcare, education and assistance to immigrants”.

It concluded the there was “an exchange of views” on various international affairs and the promotion of peace in the world through political negotiation and inter-religious dialogue, “with particular reference to the situation in the Middle East and the protection of Christian communities”.

President Donald Trump met with the Holy Father in a private audience for half an hour and then had a meeting with His Eminence Cardinal Secretary of State Pietro Parolin and His Excellency Msgr Paul Richard Gallagher, Secretary for Relations with States.

President Trump was accompanied by twelve people, including his wife Melania Trump, his daughter Ivanka and her husband Jared Kushner. Both Ivanka Trump and Jared Kushner act as assistants and advisors to the president.

In an exchange of gifts Pope Francis gave President Trump a copy of his environmental encyclical Laudato Si, as well as copies of his 2015 Apostolic Exhortation on the family, Amoris Laetitia, his 2013 exhortation, Evangelii Gaudium, and a copy of his message for the 2017 World Day of Peace.

Despite the President’s widely reported opinions on the environment, he said that he would read the encyclicals. He responded to the Pope’s gift of a medallion, which symbolised peace and unity, stating: “we can use peace”.

President Trump gave Pope Francis the gift of a set of books by Martin Luther King Jr. Those accompanying President Trump received the traditional gifts of medals and rosary beads from the Pope. He joked with the First Lady about potica, a traditional dessert from her homeland of Slovenia.

After the papal audience, President Trump and his family were given a tour of St Peter’s Basilica and the Sistine Chapel, before the President met with Italian President Sergio Mattarella and Prime Minister Paolo Gentiloni.

First Lady Melania Trump paid a visit to the Vatican-owned paediatric hospital, Bambino Gesu, also known as “the Pope’s hospital”. She placed flowers at the feet of a Marian statue at the entrance of the hospital. 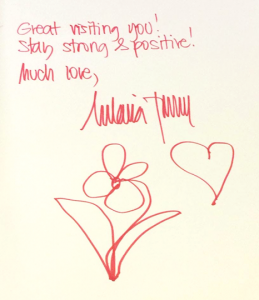 In a tour of the cardiac unit and the recreation room, she did some painting, chatted in Italian with the children from nine different countries and took selfies with them.

She wrote a message to the children in the guest book, stating: “Great visiting you! Stay strong & positive!” She ended the visit by praying in the hospital chapel.

Ivanka Trump visited the Roman neighbourhood of Trastevere to meet with the Community of Sant’Egidio to discuss efforts to oppose human trafficking.

She met with the founder of the Sant’Egidio Community Andrea Riccardi and the President Marco Impagliazzo, and they spoke about peace, Africa and fighting poverty and human trafficking.

She also heard from some women victims of human trafficking who started a new life with the support of the Community of Sant’Egidio.

She said the women were “remarkable” and “testaments to strength, faith and perseverance in the face of unspeakable adversity and challenge”. She said it was an honour to meet them and hear from them directly “about their struggles and how they were able to rebuild their lives”.