President salutes defence force values and those who uphold them 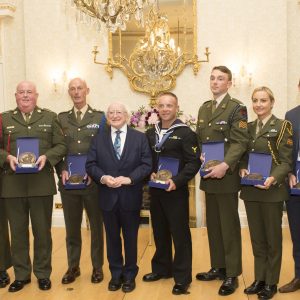 The values that guide Ireland’s defence forces – respect, loyalty, integrity, selflessness, moral courage and physical courage – were celebrated at an awards night at Áras an Uachtaráin this week.

Awards were given to service men and women, active and retired, who especially exemplify one of the six values, with an additional award given to an “Overall Champion”, this year Sergeant Major John Murray. The sergeant major has completed 16 tours of duty overseas, serving in Somalia, Chad, Syria and Lebanon.

The Respect Award was earned by Able Mech Ryan O’Driscoll of the Naval Service Diving Section. He was involved in migrant rescue duties in the Mediterranean and, closer to home, he was part of the team involved in the recovery operation following the Rescue 116 helicopter crash off the north Mayo coast over two years ago.

There was also a special award for a 15-year-old transition year student from Swords, Charlie Watson, who has shown a great deal of interest in the defence forces, especially their involvement in overseas humanitarian missions. This year, as part of transition year, Charlie plans to do work experience at the Curragh Army Camp in Kildare.

In his speech, President Michael D Higgins acknowledged the vital support given to the men and women of the defence forces by their families. He told the award winners: “I salute each and every one of you, and wish to thank you and your families for the sacrifices you have made and for your unwavering dedication to your country.”

The President, who is Supreme Commander of the Irish defence forces said: “Óglaigh na hÉireann is a defence force, and that word ‘defence’ is important. Its existence is from the founding moment of our state, for the defence of our state. With this emphasis it is different from any other force established for aggressive purpose or for aggrandisement of interests.

“Over a hundred years ago, Eoin MacNeill sought three qualities from those who had volunteered to serve in Óglaigh na hÉireann: courage, vigilance and discipline. These are the same attributes that are embodied in the oath taken by those who volunteer to serve in our modern defence forces. Members of the Army, Air Corps, and the Naval Service are expected, and indeed are proud to demonstrate these qualities in their daily duties.”

The President also touched upon growing concern that the men and women of the Irish army, air corps and naval service are underpaid. He said: “Many are understandably concerned about the ability to attract and retain people of the highest calibre in the defence forces. It is not too much, I would suggest, to expect that serving men and women should have conditions including an income and prospects that are sufficient to provide for themselves and their families. Indeed, as they are the employees of the State, such conditions should be exemplary for other parts of the society and economy. I have heard and read with anxiety of the distress that is being experienced by some of those who are giving their all to serve the State.

“There is a duty on us to acknowledge the importance of the contribution of the serving member’s family. While being a member of the defence forces is a worthy and dutiful role, it is a perilous one. Our soldiers have died on service overseas and in Ireland, reflecting the real dangers they face in serving their country and their fellow citizens.

“As President of Ireland and on behalf of the people of Ireland, I express my deepest gratitude for your support and for your willingness to allow your loved ones to face such tangible dangers and to endure lengthy separation, understanding, as you do, the importance of their work and the positive impact which they have in this country and beyond our shores.”