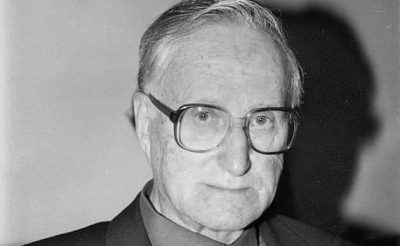 He spent most of his missionary life in the West African country as a teacher and a bishop.

The leadership of the Gambia Pastoral Institute announced his death on 3 September.

“On behalf of the Bishop of Banjul, Most Reverend Dr Gabriel Mendy CSSp, priests, Religious and the lay faithful, we regret to announce the death of our beloved Bishop Emeritus Michael J. Cleary,” the Gambia’s Pastoral Institute leadership said in a statement.

Born on 1st September 1925 in Tulrahan, Ballyhaunis, Co Mayo he was the youngest of four children of Mary and John Cleary. His mother died days later and his father died in 1929. Michael was raised in Castlebar by his maternal grandmother and his uncle and aunt.

He attended St Jarlath’s College, Tuam and studied Arts in UCD. He was ordained a Spiritan priest on 29 June 1952 along with some two dozen other Irish Spiritans, including the late Bishop John O’Riordan. He arrived in Gambia in 1953.

He served as a missionary in Fula Bantang and Basse and then taught mathematics and history at St Augustine’s High School in the capital city, Banjul for quarter of a century and was principal of the school for seventeen years. He spent his school holidays doing ministry in rural Gambian parishes.

Having served as diocesan educational secretary and Vicar General, in 1981 he succeeded the first Catholic Bishop of Banjul. The principal consecrator at his episcopal ordination was Archbishop Johannes Dyba and the co-consecrators were Archbishop Joseph Ganda, and Bishop Michael Joseph Moloney. Gambia’s vice-president was among some 3,000 attendees at his episcopal ordination.

After twenty-five years as Bishop of Banjul, Bishop Cleary retired in February 2006 at the age of 80 and he was succeeded by Bishop Robert Ellison. But he remained in The Gambia until 2015 when his more than six decades in the country came to an end.

Addressing the faithful gathered at St Therese Parish in Kanifing for his farewell Mass, Bishop Cleary said, “I am too emotional, but I have always dreaded parting from friends and saying goodbye. Sixty-two years ago, I came to the Gambia, and it is here I spent all my priestly life. Later as Bishop, I travelled throughout the country and got to know well and love its people. Otherwise, I would not have stayed. I made many friends here, both Muslims and Christians.”

Explaining his decision to return to Ireland, he added, “Now, in my 90th year, I feel I should live nearer to a hospital and nursing care and not be a burden here. So, I wish to sincerely thank you for the best years of my life.”

In Ireland, he was a member of the Kimmage community in Dublin in his final years, before he moved to Nazareth House in February 2020.

In a statement, State House in Gambia said, “One of the historic events Bishop [Cleary] will also be remembered for is the hosting of his holiness the late Pope John Paul II, now Saint John Paul II, when he visited The Gambia in February 1992.”

The statement continued, “The love Bishop Cleary had for The Gambia was further manifested after his retirement, he stayed in The Gambia for nine years before finally leaving for his country of origin, Ireland. May his soul rest in peace.”

Pope St John Paul II visited the predominantly Muslim nation in 1992. In his address to Gambians during his visit, Pope John Paul II said, “The Catholic Church everywhere, as also here in The Gambia, welcomes opportunities for Christians and Muslims to know each other better, to share with each other their reverence for God, and to cooperate in serving the human family.”

He added, “Catholics rejoice in the religious freedom which marks your society, and which makes it possible for the majority Muslim community and the Christian community to live together in respect and accord.”