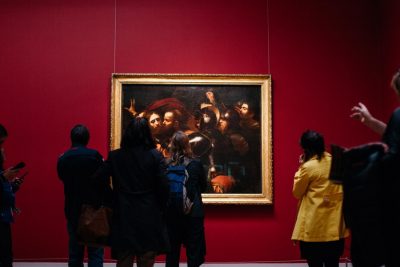 Today President Michael D. Higgins is marking the 25th anniversary of the unveiling of a painting found in a Jesuit dining room and subsequently described as one of the greatest art discoveries of the 20th century.

President Higgins was Minister for Arts, Culture and the Gaeltacht at the time of the discovery and was present at the official unveiling of Caravaggio’s masterpiece ‘The Taking of Christ’ in the National Gallery of Ireland on 16 November 1993.

“This rediscovered masterpiece has a special place in the gallery and we remain indebted to the Irish Jesuit community for their continued generosity in making the work available on loan,” said Sean Rainbird, Director of the National Gallery of Ireland, who said it is a great honour to welcome the President to the Gallery.

The President’s visit is one of several events of the day. Fr Noel Barber SJ, who initiated the restoration of the painting, will be in conversation with broadcaster Marian Finucane and former director of the Gallery Raymond Keaveney, discussing Caravaggio and the impact of his painting on gallery visitors since it was first displayed in 1993.

He explained how the painting led a quiet life for decades in the dining room of the Leeson Street Jesuit Community.

As new superior in 1990, Fr Barber set about renovating the house and decided that the somewhat dusty painting needed restoration. The National Gallery of Ireland agreed to organise work on the painting, which was attributed to artist Gerard Honthorst, and sent restorer Sergio Benedetti to examine it.

“He was an expert on Caravaggio and the Baroque era and he said nothing only ‘we should restore that painting’, and in the restoration he confirmed what he hardly dared to hope – that it was not a Honthorst but a missing Caravaggio. That required a great deal of forensic examination and a great deal of examining the provenance,” Fr Barber told Catholicireland.net.

He explained that sadly Sergio Benedetti passed away in recent years and will miss the anniversary events commemorating the day on which the painting was given on indefinite loan by the Jesuits to the National Gallery of Ireland. 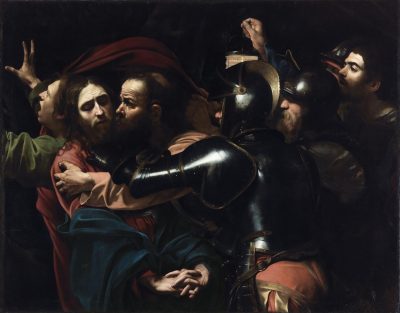 The 25th anniversary events, which are free, take place at the gallery today (15 November) and include:
• A display of material from the gallery’s library and archives, showing the history of the painting from its commission for the Roman Marquis Ciriaco Mattei, at the end of 1602, until today.
• 2 p.m. and 4 p.m.: Two screenings of ‘Private Life of a Masterpiece: “The Taking of Christ” by Caravaggio’, a BBC art documentary investigating the painting and revealing the intricate details of the artist’s life.
• 5.30 p.m.: ‘Caravaggio 25 Conversation’ with Noel Barber SJ in conversation with former Director of the gallery Raymond Keaveney, led by broadcaster Marian Finucane.
• 6.30 p.m.: Caravaggio lecture with Professor Richard Spear, Professor Emeritus, Oberlin College, and Affiliate Research Professor, University of Maryland.
• 4.30 p.m.–8.30 p.m.: Thursday Lates/Caravaggio 25, a night of ’90s nostalgia, with music from Nialler9, special guided tours, pop-up performances by musicians from the Royal Irish Academy of Music, dramatic shadow-puppet performances by Tales from the Shadows, nail art by Tropical Popical and Italian-inspired food and drinks.