President Higgins pays tribute to the witness of Romero 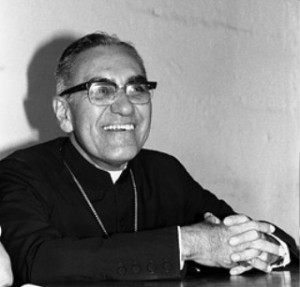 President Michael D Higgins has paid tribute to the witness of Archbishop Oscar Romero on the final day of his visit to El Salvador.

Following a visit to the Archbishop’s grave in the Cathedral of San Salvador, the President said, “The struggle of the poor in El Salvador was represented by his murder and by the killing of 30 to 40 mourners at his funeral by government forces.”

“The Archbishop’s death drew such attention to the situation in El Salvador that the indiscriminate killings were suddenly in the gaze of the world,” President Higgins added.

Archbishop Romero was gunned down by assassins as he raised the chalice at the consecration during Mass at La Divina Providencia hospital on 24 March 1980.

He was killed the day after he had called on the Salvadoran military to obey God’s higher order and stop the repression and violation of basic human rights.

The assassins are believed to have belonged to a right wing death squad led by former Major Roberto D’Aubuisson. He later founded the political party, Nationalist Republican Alliance (ARENA), and organised death squads that carried out politically motivated assassinations and other human rights abuses.

Speaking before the Archbishop Romero’s family, representatives of the Catholic Church, diplomats, and government officials, President Funes said those involved in the assassination “…unfortunately acted with the protection, collaboration or participation of state agents”.

President Higgins described his visit to Archbishop Romero’s grave – dubbed ‘the voice of the voiceless’ – as “very moving.” He also praised the role of the Church in the region which he said preached a message of Christ that was one of rights and equality.

He told the Irish Times that the Archbishop’s assassination in 1980 sparked great interest in Ireland in the small Central American country which was being torn apart by civil war.

Of the Archbishop, President Higgins recalled, “He spoke so often about an immediate violence, that is the one that killed him, but then there is a more sustained violence which is the violence of oppression and the violence of the state. It is a very very moving occasion to come here,” the President told RTE News.

An estimated 80,000 people died between 1980 and 1992 in El Salvador’s civil war as the US-backed government and military killed and tortured its population and cowed any dissent.

The President said that when footage of the killings of those attending Archbishop Romero’s funeral went around the world, people then realised what was happening and the enormous number of deaths.

One Irish missionary who is based in El Salvador and who was present in the Cathedral for the funeral of the Archbishop in 1980 when the military started shooting and lobbing bombs at those attending the funeral recalled the events for RTE News.

“I can recall that when you went into the cathedral, there was a pile of bodies getting higher and higher, because they were bringing them as people fainted or died outside. There was a crush inside the cathedral and the heat was unbearable,” Fr Gerry Moore, a Franciscan, related.

Visiting the Monument to Memory and Truth on which up to 30,000 names of El Salvador’s dead and disappeared are commemorated, President Higgins identified the name of his friend, the Salvadoran lawyer Marianella Garcia who first drew his attention to the killings in El Salvador in 1978.

She was raped and murdered by soldiers a year after President Higgins led a fact-finding mission to El Salvador in 1982 to investigate a massacre at the rural village of El Mozote.

The President was met at the wall by Flora Cuneguna Pena, president of an organisation named after Garcia which represents families of the victims of human rights abuses. She lost three sons and a daughter in the civil war.

Speaking at the memorial, President Higgins said, “To be forgotten is to die twice but any attempt to stop remembering the people who died in the conflict is to die three times.”

“The wall is a great act of love and remembrance. It means that the sacrifice that people who died in terrible times, the people who worked for human rights will not be forgotten.”

Trócaire’s Sally O’Neill accompanied the President on his visit to some of the projects supported by the Catholic agency and Irish Aid. She told RTE News that “for thousands of Salvadorans who feel that in the last decade the move here has been to brush the past under the carpet this really is music to their ears.”

Irish Aid has provided over €7m over the last nine years to projects managed by the Salvadorean government and President Higgins toured an exhibition featuring some of them.

He also met one man who is now in his 30s whom he had first met as a small child in a refugee camp in his visit in 1982.