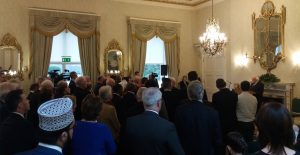 President Michael D. Higgins has described the compassion, hope and courage of Irish members of the Missionary Sisters of Our Lady of Apostles and the Society of African Missionaries as “truly exemplary”.

In his address at a reception for ‘Desertification – Ireland’s Role in this Global Challenge’, the President said the missionaries from the two congregations, which are linked through their founder, had committed their lives “to standing in solidarity with communities across the developing world”.

“With them, you have built schools and clinics, and you have planted trees. You have helped the most vulnerable within those societies and stood with them against injustice and oppression. Many of you have lived within communities in the Sahel Region and in other areas facing similar challenges and have supported them in their efforts to withstand and adapt to the changes that we now speak about.”

In the presence of the papal nuncio, Archbishop Jude Okolo, the head of state said that as President of Ireland, he would like to acknowledge the enormous contribution the OLA and SMA had made.

He said these missionaries “understand far better than most how the structures we have created at a global level can impact on people living a precarious existence. How changing climate patterns and reducing yields due to soil degradation can be catastrophic. You are well placed to help teach us, in Ireland, of why this matters to us and how we can act to help.”

President Higgins recalled how pleased he was when Don Mullan told him that the Society of African Missions is integrating the Great Green Wall into its Laudato Tree project.

This is an extension of what President Higgins described as “the wonderful Thumbprint Campaign for Climate Justice” which is bringing the message of climate justice into schools, parishes and communities across Ireland.

He told the assembled missionaries and representatives of NGOs that Ireland shares much with the nations of Africa: “a long and unremitting struggle for independence and the challenges of creating a nation-state capable of fulfilling the potential and promise of our independence”.

This shared experience, he said, has given rise to a special solidarity, one that has reached its highest expression in the work of the Society of African Missions and the Missionary Sisters of our Lady of Apostles.

The challenges of living in this age of the Anthropocene cannot be met by our continuing in the grip of old and tired orthodoxies, or by our being constrained by an economic philosophy which would separate our engagement and activity in economic life from our culture and society or from the natural world, President Higgins warned.

“I believe that the global community can draw inspiration from Pope Francis, who has, throughout his pontificate, offered words of hope and inspiration in times when they are desperately needed.”

He said as Uachtarán na hÉireann, he looked forward to welcoming Pope Francis to Ireland this August.

Elsewhere in his address, President Higgins recalled his meeting in January with the contributors to the volume ‘Laudato Si’: An Irish Response’.

Edited by Fr Sean McDonagh, he paid tribute to the Columban missionary describing him as “a powerful champion for ecological justice”.

He said the book and its contributors were “another reminder of the vital moral intervention that Laudato Si represents as a call for both global social and environmental justice, and for a ‘new and universal solidarity’ in the face of interrelated threats which constitute nothing less than an ‘ecological crisis’.”

“Above all, Pope Francis reminded us that it is only by recognising that pollution, climate change, the loss of biodiversity, desertification, the growing scarcity of fresh water, global social and economic inequalities are all part a single complex and interconnected system, one that we can and must come to understand and to change.”

These great global challenges cannot be met alone by any one country or group of countries. They require international co-operation and global solutions.

For that reason he said he was very pleased that the Executive Secretary of the United Nations Convention to Combat Desertification, Ms Monique Barbut, was attending the gathering.

More than any other place on Earth, the continent of Africa is now the crucible for the global challenges that we confront, President Higgins said.

He added that the Continent was bearing and will continue to bear the greatest consequences of climate change. The United Nations Department of Economic and Social Affairs has estimated that by 2050, the continent will contain 2.5 billion people, one billion of whom will be young people.

“By mid-century then, Africa will be the continent of the young, with nearly forty percent of the young people on this planet – it promises to be a continent of promise and opportunity, one that will carry so many of the hopes and the dreams of our shared planet.”

This growing population will require food, water, energy and shelter and all the mental and material resources required to lead a fulfilling live.

In Africa, these needs must be met on a continent in which 46% of the land is now affected by land degradation and where, as a result, the livelihoods of nearly 65% of the people are jeopardised, the President warned.

He said this was nowhere more critical than the Sahel Region, home to over 100 million people, and the area most vulnerable to desertification and the gradual encroachment of the Sahara.