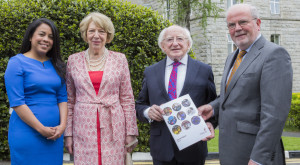 President Michael D Higgins paid an effusive tribute on Wednesday to the contribution of Irish missionaries to education and healthcare in the developing world.

In his address at the start of the annual conference of Misean Cara in Milltown, the President described Irish missionaries’ contribution as “impressive” and a “significant one”.

“It is a contribution that has impacted on numerous lives across the decades and crucially it directly contributes to long-term self-sufficiency and civic enrichment of the host societies,” he said.

On official visits to countries where Irish missionaries and NGOs are working, he and Mrs Higgins had been greatly struck by the solidarity and sense of community developed by missionaries.

He said Irish missionaries had helped build the foundations for enduring relationships between Ireland and many developing countries.

“Their selfless, and often lifelong work, has been a powerful expression of the vision of the church of the poor, so faithfully represented in the documents of Medellin and Puebla and now made more central with the beatification of Oscar Romero” he stated to applause from the audience of 140 missionaries from Ireland, the UK, Nigeria, Ghana, Kenya and Australia.

After the President’s speech, delegates discussed the improvements their work is having for the poor and marginalised, and debated plans for the future.

Recalling his and Mrs Higgin’s family connections to the Irish missionary movement, the President referred to the work of Sr Margaret Coyne of the Daughters of Charity, who is a sister of Mrs Sabina Higgins, and who set up the Mekele eye clinic in northern Ethiopia.

President Higgins commented, “As a nation we have a strong record of commitment to the alleviation of poverty and are known for our humanitarian instinct. It is a reputation sourced in our experience of famine, also rooted, quite profoundly, in our long and proud history of missionary work.”

Elsewhere, President Higgins told representatives the 87 religious congregations and two lay missionary organisations, “For many decades Irish missionaries were the faces of Ireland abroad, living and ministering amongst the poor and marginalised in developing countries.”

The legacy of those missionaries was the compassion, commitment and great spirit of humanity to the poor and vulnerable in Africa, Asia and Latin America.

“Today, it is widely acknowledged that Irish missionaries led the way for much of what the Irish Government, through Irish Aid, is now doing in the area of development assistance.”

As President of Ireland, he said, he has been very proud to witness all that has been achieved across many decades by those Irish men and women who have dedicated themselves tirelessly to achieving better lives for the dispossessed and underprivileged, striving to enable them to realise their possibilities and play their own role in the creation of a fairer world.

Misean Cara accesses and distributes funds to support the international development work of its member organisations.

Last year, 356 missionary projects were approved for funding by Misean Cara, which is financed by up to €14 million from Irish Aid.

A further 30 emergency applications were approved, totalling €428,000, for Ebola-response measures in Sierra Leone, Liberia and Guinea.

“Last year, we distributed over €14m in project funding to our members in 49 countries. Irish and local missionaries are working with communities to find their unique route out of poverty,” Misean Cara CEO Heydi Foster explained. There was a 75% approval rate for applications.

“They build schools and offer a way out of poverty through high quality education. They run clinics and health centres, and provide life-saving medical treatment to people living with HIV and AIDS, cancer and other illnesses,” she explained of the kinds of projects that missionaries establish.

Missionaries have a major role to play in the future of international development. Their connections with communities last longer than the cycle of a humanitarian crisis.

During the Ebola crisis, she explained, missionaries remained in solidarity with their communities providing emergency food supplies, shelter, and medical care. Although some were also amongst the casualties they still remained.

“The story that gripped the world’s attention last year was the Ebola outbreak. Our members are part of the prestigious group of Ebola fighters who were, and continue to remain at the frontline.”

“Even as Liberia has been declared ‘Ebola-free,’ and Sierra Leone will follow soon, our members like the Missionary Sisters of the Holy Rosary, and the St John of God Brothers are part of the recovery. I am proud that our organisation was able to allocate nearly €500,000 to respond to Ebola,” Heydi Foster said.

The 2014 Misean Cara Annual Report shows that the Mercy Sisters set up the HIV and AIDS Mukuru Home Based Care Clinic in the heart of the Mukuru slum in Nairobi, Kenya.

The clinic provides a life-line to many people living with HIV and AIDS through their support services. There a volunteer called Amy walks the narrow mud streets daily with a megaphone encouraging people to go to the clinic.

They are partnering with the Catholic Health Care Association of Southern Africa to upskill their health care projects through a NGO/government partnership.

According to Matt Moran, Chairperson of Misean Cara, who is standing down after five years in the role, there are currently under 1,500 Irish born missionaries ministering in the global south alongside an estimated 3,500 local colleagues.

In his address to the Misean Cara AGM, President Higgins also highlighted how 2015 has been designated as the European Year of Development by the Foreign Affairs Council of the European Union.

“It is a seminal year for the future of human development and one that will require brave and wise decisions from world leaders. It will also require vigilance and activism among Ireland’s NGO workers, parliamentarians, public intellectuals, academics, and beyond, to ensure that our policies are sourced in global welfare,” the President warned.

He said the UN Secretary General, Ban Ki-Moon, in a key note address in Dublin this week, had emphasised the complex and tight connection that exists between peace, development and human rights.

He reminded the AGM that viable solutions to hunger and poverty cannot be found if we do not come together to tackle and defeat their underlying causes, building our solutions on strong and sustainable bedrocks that recognises the role of all nations in eliminating policies that work against sustainable development.

“This year – 2015 – is a year of decision making that will affect all our futures. Defining and building sustainable development goals will be the challenges facing governments as they meet in Addis Ababa in July, New York in September, then in Paris a new strategy for addressing climate change will be presented to world leaders in December.”

“All nations have the opportunity to unite on agreed ambitions to eradicate poverty, shift the world toward a sustainable development pathway, agree the actions required to assure all people a sustainable global climate and agree the cooperation to achieve these vital outcomes.”

Returned Columban missionary Fr Pat Raleigh praised President Higgins for speaking about climate change. He told CatholicIreland.net that he had worked in both the Philippines and Pakistan in the 1990s.

“The killing of the Christians in Lahore a couple of weeks ago was very frightening. It is a very challenging situation particularly for any missionary in Pakistan and for the local church.”

“It is very sad. The Pakistani people are an extremely hospitable people but like any other country you get a group who make life difficult for people,” he said.

Explaining the role of returned missionaries in relaying and campaigning on behalf of the voiceless he said last weekend the Columbans in Dalgan Park had been visited by a Burmese bishop who related the difficulties and challenges facing his diocese along the Burma/Myanmar border with China and the major issue of internally displaced.