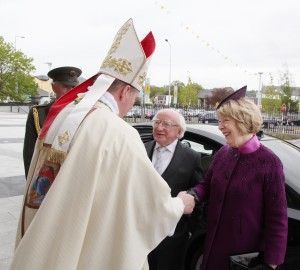 Bishop Francis Duffy Bishop of Ardagh and Clonmacnois greeting President Michael D. Higgins and his wife Sabina on their arrival at St Mel’s Cathedral for the Mass of Rededication. Pic John Mc Elroy.

In his homily on Sunday at a Mass to formally rededicate the Cathedral, which was burnt to the ground at Christmas 2009, the retired Bishop of the diocese, Dr Colm O’Reilly paid tribute to St Mel’s webcam, which is operated by churchservices.tv, in helping build up the community of faith.

“Our liturgies are reaching out to a wider community,” he told the congregation, which included by President Michael D Higgins and his wife Sabina, as well as 24 bishops from across Ireland, including the Primate of All Ireland, Archbishop Eamon Martin and his predecessor, Cardinal Sean Brady, and representatives of other Christian denominations.

Bishop O’Reilly explained that the motto adopted by the diocese of Ardagh and Clonmacnois in 2010 when it committed itself to restoring the gutted St Mel’s, the biggest Church restoration project in Europe in recent times, was “faithful to the past, building for the future”. 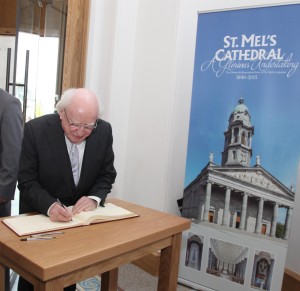 One of the major challenges was how to transform a classical basilica plan into a 21st century sacred space where it can be clearly seen that the ‘entire assembly is celebrant’”.

He said, “Notwithstanding the fact that there will be some who will have reservations about the outcome of his endeavours, there is a quite astonishing level of approval of the plans he produced and their implementation guided by his successor as lead architect, Colm Redmond.”

It was 175 years ago that the foundation stone of the Cathedral was brought from the ruins of the ancient cathedral at Ardagh.

According to Bishop O’Reilly, it lies where the founder of the Cathedral, Bishop William O’Higgins, laid it, probably directly under where the tabernacle now rests on its marble pillar.

An estimated crowd of 40,000 people assembled to witness the laying of the foundation stone on the 19 May 1840.

He said the recent successful restoration of the Cathedral was greeted with excitement that replicated the buoyant mood of that other great day in 1840.

“Thanks to the reach of modern mass communications an even greater number of people were touched by the intense emotion of the reopening of this historic Cathedral at Christmas of last year,” the Bishop stated.

Describing it as a time for “another new beginning here in this Cathedral town”, he explained that the cathedral square has been redesigned to reach out and say ‘welcome in’ to all. 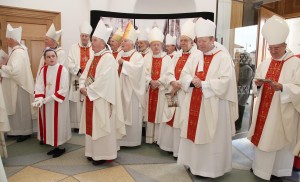 Bishops and Altar Servers getting ready to process into St Mel’s Cathedral for the beginning of Mass. Pic John Mc Elroy.

“Now we want to see this sacred space filled with young and old, natives of Longford and people who are natives of other countries who have come to live here,” Bishop O’Reilly told the packed cathedral.

Remembering the lives of “our ancestors in faith” such as the two Dominican friars, Laurence and Bernard O’Farrell, who were martyred in Longford in 1651, Bishop O’Reilly said they point to the faith itself which is ever ancient and ever new.

In his words of welcome to President Higgins, his fellow bishops, priests and representatives of the 41 parishes of Ardagh and Clonmacnois, as well as local civic leaders, and those who worked on the project, Bishop Francis Duffy told them they were gathered to re-dedicate the “beautifully restored” cathedral. 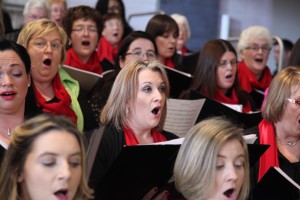 Members of the choir singing at the mass of rededication in St Mel’s Cathedral Longford. Pic John Mc Elroy.

“We ask God to mark it as a special place, a sacred place for people to worship, to pray and to experience the peace and love of God.”

“We give thanks for all the work of restoration. We thank God for the imagination, the talents and the skilled work of those involved at all stages of this project.”

“We give thanks for the generations of Longfordians and people from the parishes throughout the diocese whose families and communities marked significant moments in this Cathedral.”

One of the concelebrants at Sunday’s Mass was Bishop Richard Higgins, a Longford native, who currently serves as a bishop with the archdiocese for the Military Services in the USA.

He told CatholicIreland.net, “I was raised on the Battery Road, the main street in Longford on the way out to Sligo.” 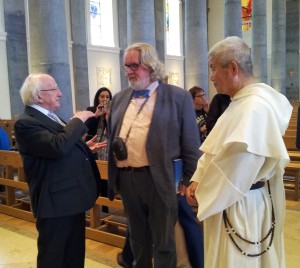 One of five children, his father was the Chief Assistant County Engineer and he was also the chief fire officer for Longford and Westmeath.

“I grew up in this town. I went to St Michael’s boys’ national school and St Mel’s College and then I went to the Irish College in Rome to study for the diocese of Sacramento in California.”

He has been in the US since 1968 and spent 30 years as a US Airforce chaplain.

“I spent six years in the diocese of Sacramento first and then I went to the Airforce for 30 years and I was retiring in Colorado Springs when I got called by the Nuncio to an appointment as an auxiliary bishop of the archdiocese of the Military. I have been a bishop now almost eleven years.”

He said he had come over specially for the rededication Mass as Bishop Francis Duffy had invited him.

Asked about St Mel’s, he said it was “the heart and soul of the town – the spiritual home”.

He added, “I got my vocation here. My mother used to bring all five of us in here and this is where I first heard the call – ‘what are you doing with the rest of your life; have you ever thought about being a priest’. At the time I was going to be an airline pilot.”

As it turned out, having served as a chaplain in the Airforce, “I got the best of both!”