Home > News > President must decide by Wednesday on Abortion Bill

President must decide by Wednesday on Abortion Bill

Decision on whether or not to refer the Protection of Life During Pregnancy Bill to the Supreme Court to check its constitutionality pending. 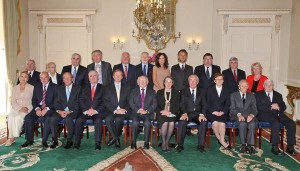 President Michael D Higgins has until Wednesday to decide whether or not to refer the Protection of Life During Pregnancy Bill to the Supreme Court to check its constitutionality.

On Monday afternoon, the President held a three-hour meeting at Áras an Uachtaráin with 21 of the 24 members of the Council of State to discuss the bill.

Last Tuesday evening, it was passed by the Seanad by 39 votes to 14. It was sent to the President on Wednesday to sign off on. Mr Higgins has until this Wednesday to either sign the bill into law or refer it to the Supreme Court.

If the Bill is sent to the Supreme Court and the court finds the bill to be in compliance with the constitution, it will be enshrined into law and can never be judicially reviewed.

Among the 21 members of the Council who attended the meeting with President Higgins were the Taoiseach, Enda Kenny, and the Tanaiste, Eamon Gilmore, as well as former Taoisigh Liam Cosgrave, Bertie Ahern and Brian Cowen. Former president, Professor Mary McAleese. attended along with the Chief Justice Susan Denham and Mr Justice Nicholas Kearns, the Attorney General, and Mrs Justice Catherine McGuinness.

Speaking in Westport, Co Mayo, ahead of President Higgins’ meeting with the Council of State, the Archbishop said even if abortion becomes legal, it continues to be immoral as far as the Church is concerned.

“No matter what is enshrined in law – it doesn’t affect the morality of it,” he said.

“Very often in the popular mind, there is a misconception that what is legal is moral,” and this misconception suggested that the Church needed do “a lot of catechesis” to inform the faithful.

In his homily for Reek Sunday morning, delivered on the summit of Croagh Patrick, the Archbishop said the Church did not want to domineer or have its moral teaching enshrined in law out of a sense of entitlement.

Instead, the Church was concerned that the value at stake ought to enjoy the protection of civil law.

The status in civil law of such an issue does not affect its moral value, he said.

Calling for the religious voice to be heard in public debate, he said a truly liberal society not only permitted that but encouraged the Church to voice its views.

“I think what the Church really needs is the freedom to be able to speak the truth and address the situation as the Church sees it, he told CatholicIreland.net.

“A mature secularism would welcome and provide space for religious believers in the public sphere. A mature Catholicism would make its contributions with courtesy and respect for those with whom we disagree,” he said.