Home > News > President to attend Mass in solidarity with France

President to attend Mass in solidarity with France 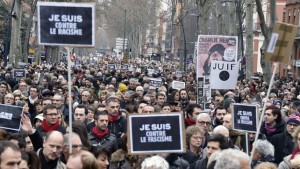 President Michael D Higgins will attend a Mass in solidarity with the people of France at the Pro-Cathedral in Dublin later today.

The Primate of Ireland, Archbishop Diarmuid Martin will be the main celebrant at the Mass which has been organised in collaboration with the Ambassador of France H.E. Jean-Pierre Thébault.

Archbishop Michael Jackson of the Church of Ireland diocese of Dublin and Glendalough as well as other religious leaders, members of the Diplomatic Corps, and members of the French community in Dublin will also attend.

The service, which begins at 5.45pm, is an opportunity for those who wish to show their solidarity in prayer with the people of France following the terrorist attacks of the past week.

Separately, Pope Francis has said the massacres in Paris are the results of a culture of rejection which severs the deepest and most authentic human bonds, leading to the breakdown of society and spawning violence and death.

“We see painful evidence of this in the events reported daily in the news, not least the tragic slayings which took place in Paris a few days ago,” the Pontiff said and added that with this mentality other people “are no longer regarded as beings of equal dignity, as brothers or sisters sharing a common humanity, but rather as objects”.

Addressing the diplomatic corps to the Holy See, the Pope warned that people can become enslaved to the latest fads, power, money, and “even deviant forms of religion”.

Recalling his recent Message for the World Day of Peace, he said it dealt with the issue of today’s multiple forms of enslavement. “All of them are born of a corrupt heart, a heart incapable of recognising and doing good, of pursuing peace.”

The tragic consequences of this “culture of enslavement” is the never-ending spread of conflicts.

“Like a true world war fought piecemeal, they affect, albeit in different forms and degrees of intensity, a number of areas in our world, beginning with nearby Ukraine, which has become a dramatic theatre of combat.”

Pope Francis said it was his hope that through dialogue the efforts presently being made to end the hostilities would be consolidated, and that the parties involved would embark as quickly as possible, in a renewed spirit of respect for international law, upon the path of mutual trust and fraternal reconciliation, with the aim of bringing an end to the present crisis.

The Pope also highlighted the “horrendous crime” of rape in his address on Monday.

“This is a most grave offense against the dignity of women, who are not only violated in body but also in spirit, resulting in a trauma hard to erase and with effects on society as well. Sadly, even apart from situations of war, all too many women even today are victims of violence,” he said.