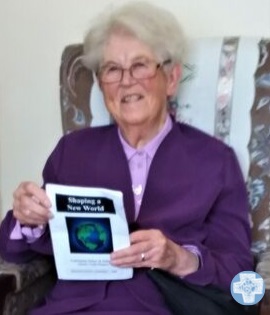 Kilkenny County Council has honoured a Presentation Sister for helping to set up finance of more than €120 million to help build and sustain struggling community groups throughout Ireland.

The reception was hosted by the Mayor of Kilkenny, Cllr Martin Brett, in conjunction with Kilkenny County Council on Friday 27 September at City Hall, where the pioneering sister was presented with the Founding President Award.

Sister Magdalen Fogarty has been a real visionary, Paul O’Sullivan CEO of Clann Credo said. He added that she had worldwide responsibility for the finances of the Presentation order. “In that role, she started wondering how can we make sure that finance is working for justice and equity so she set up Clann Credo to do it directly herself,” he told KCLR News.

Founded in 1996, Clann Credo has provided over €120 million in Community Loan Finance to more than 1000 projects over the past 23 years, creating and sustaining thousands of jobs and strengthening communities nationwide.

“Twenty three years ago a radical new concept began to percolate through Ireland’s community and voluntary sector, one that has challenged the conventional way of thinking ever since. Like all great ideas it was deceptively simple, and worked by pressing finance into service as an agent of social justice and social transformation,” the Presentation sisters stated.

Waterford-born Sr Magdalen Fogarty and the Presentation Order grasped this potential. With their support, ‘Clann Credo, Community Loan Finance’ was established and since then other religious congregations have joined Clann Credo as social investors. Clann Credo is now the leading provider of social finance in Ireland.

The finance provided has helped all aspects of community life throughout the country. It has also enhanced the lives of thousands of people and communities through projects that deliver important services like childcare and elder care, as well as social infrastructure like community halls, sports centres and other community centres vital to local life.

“A key focus of Clann Credo’s work is supporting and nurturing community and voluntary activity. It recognises that in every one of these often marginalised communities there are local heroes whose only goal is to improve the lives of those around them. These financially supported initiatives have sustained thousands of jobs and strengthened communities nationwide over the past 20 plus years,” the Presentation sisters stated.

They congratulated Sr Magdalen Fogarty on what they called this “wonderful occasion for celebration” and recognition of her considerable contribution. They wished her continued blessings in all that she continues to do.