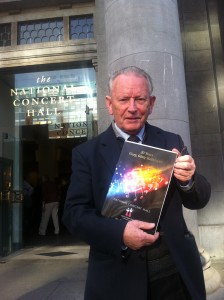 Music arranged by Brother Michael McKeown was among the repertoire performed by the National Children’s Choir and Orchestra at three sell-out concerts at the National Concert Hall in Dublin earlier this week.

Between 6-8 June, 1,000 children from over a hundred schools around Ireland sang in the three nights of the “Glory, Glory Hallelujah!” concerts compèred by RTÉ’s Mary Kennedy and attended by several thousand people.

Speaking after the concerts, the Presentation Brother from Ardbo in Co Tyrone commented, “The children were trained to perfection. They were a credit to their parents, teachers and the organisers.”

The arrangement, taken from Bro Michael’s book, ‘An Cór Gaelach’, was performed by 8,000 children earlier this year at concerts around the country in preparation for last weekend’s grand finale in Dublin.

Bro Michael holds a degree in music from UCC and taught for many years at St Patrick’s Boys’ Secondary School in Dungannon where he had several successful choirs and concert bands.

He later served for several years as a missionary in Slovakia working with the Roma people. He lives now in Dublin.

This year marks the 30th anniversary of the founding of the National Children’s Choir.

Almost 150,000 children have participated in the choir since its formation in 1985 by Dr Seán Creamer.