Home > News > ‘Preparation and Safety’ is the message

‘Preparation and Safety’ is the message 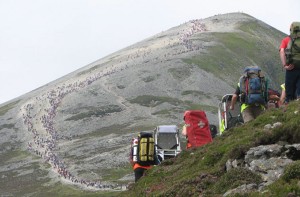 With up to 30,000 people expect to climb the 764 metres to the summit of Ireland’s ‘Holy Mountain’ ‘Preparation and Safety’ is the key message been delivered by Mayo Mountain Rescue (MMR).

Speaking to Catholicireland.net MMR spokesperson Ruth Cunniffe explained the safety protocols been put in place for the day. “Along with MMR’s team of about 30 volunteers, some eight other mountain rescue teams around the country will despatch about ten volunteers each, and Calder Valley will send a group from Wales. They will be supported by a number of Order of Malta and Civil Defence personnel and the Air Corp will have a helicopter on standby at Knock Airport. An Garda Síochána and members of the Murrisk community also play a pivotal role in the management of the event.”

To date this year there have been 20 call-outs to Croagh Patrick with many of them non-life-threatening ankle or head injuries, mainly incurred on the cone while descending, she revealed.

Ms Cunniffe advised that everyone should ”take their time climbing the mountain and should bring adequate food supplies and water with them”. She also advised that Everyone climbing generally should have a means of contacting help. A Fully Charged Mobile Phone, and possibly a second or third if your climbing in a group”.

On the last Sunday in July each year pilgrims climb Ireland’s “holiest mountain” for Reek Sunday. The pilgrimage has been held yearly for about 1,500 years and is held in honour of Saint Patrick who, according to tradition, spent 40 days fasting on the mountain in the year 441.