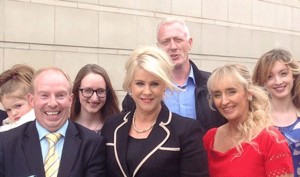 Bernadette Smyth and supporters outside court following her acquittal on 29 June 2015.

The dismissal of the criminal case for harassment against Bernadette Smyth, founder of Northern Ireland pro life agency Precious Life, is of fundamental importance to ensure important civil rights like freedom of assembly, freedom of religion and freedom of speech according to her legal team.

Ms Smyth appealed against the conviction which also imposed a restraining order on her.

On Monday 29 June the appeal was heard before Judge Gordon Kerr.

Evidence was given in the morning on behalf of Dawn Purvis. After lunch Counsel for Bernadette Smyth appealed for an acquittal.

Accepting the reasons, Judge Kerr dismissed the case for ‘insufficient evidence’. The Public Prosecution Services appealed for the restraining orders to remain in place. Judge Kerr said he would hear arguments on this the next day.

On Tuesday Judge Kerr lifted the restraining order saying there was no reason to keep it in place as Ms Smyth had been acquitted.

“It was a great relief. It has been a long ordeal,” said Ms Smyth who has been in court on five occasions over the case in the previous year.

“We can build on this,” she told CatholicIreland.net. “It could have been detrimental for the future for our right to be outside the Marie Stopes Clinic.”

For fifteen years Precious Life and other pro life agencies have been holding prayer vigils outside clinics. “We never had any issue of public order cases or arrests until the case against me,” she said.

After the case Precious life and colleagues in other pro life groups began having problems with the police who cited the Judge Chris Holmes decision.

In addition, the Back Off campaign was launched in the UK demanding a buffer zone around abortion centres. 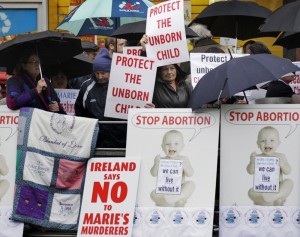 “If my case hadn’t been quashed it could have potential effects on the future of pro life activism. Even handing someone a leaflet could be interpreted as being ‘intimidating’,” said Ms Smyth.

However, the threat of legal action against pro life protesters outside clinics remains.

Three criminal cases are coming up in the coming months – two relating to assemblies outside the Marie Stopes Clinic and a third relating to a protest outside the Family Planning Centre on Great Victoria Street in Belfast.

The first case takes place this Monday (6 July) against a pro life activist Moira Brennan. The other two cases have been put back to the autumn.

Today Bernadette Smyth will be one of the speakers addressing the Rally for Life march in Dublin to express opposition to aborting unborn babies with a disability.

She urged the public to “get off their couches and come out to the streets”.

“It is a time of decision. We’ve got to get serious about ‘taking back’ – changing legislation, re-electing new politicians, changing the whole face of this battle by using our gifts and talents for the betterment of the pro life movement. We are a massive movement in Ireland. I still believe we are the light of the world in this global battle.”

The Rally for Life is organised by Youth Defence, the Life Institute and Precious Life. It begins at 2pm this Saturday on Parnell Square before marching to the Dáíl.