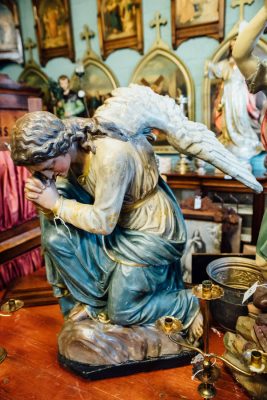 Pre-Vatican II ecclesiastical items and relics, some of which have featured on the big screen, are to go under the hammer.

The auction of 200 lots from a private collection includes everything from silver Victorian chalices to candelabras to embossed and embroidered pelmets from a canopy used in the May procession, which the owner acquired from a French religious order.

Hand-embroidered intricate banners including St Therese of the Little Flower, a guardian angel, and double-sided Mary Immaculate, are estimated to be nearly a century old. Some of the statues, including a pair of angels and large kneeling plaster statue of St Michael the Archangel, could be more than a century old. Vestments, a gothic baptismal font and unique crib figures made in Germany but found in a west of Ireland monastery are among other items to go on sale at auction from Wednesday 7th and Thursday 8th November at Victor Mee Auctions in Co. Cavan.

Auctioneer Victor Mee told CatholicIreland.net that the collection was made up of good quality pieces.

“We haven’t had a collection like this before. We get the individual pieces every now and again,” Mr Mee said. He has already had a query from the owner of a country estate hotel property who wants refurbish an old chapel on the grounds for wedding ceremonies.

The items are so authentic that they have had a huge appeal for filmmakers who featured them in films.

“During his time of buying and selling ecclesiastical items, the collector received calls from movie production companies in search of period religious items,” said Mr Mee. “Some of these items have appeared in movies made in Ireland including Moone Boy, Calvary and The General, to name a few, giving these pieces an added Hollywood appeal.”

He told Catholicireland.net that there are plenty of keen buyers for ecclesiastical items these days. “Statues do sell. I’ve just come from an auction in Laois and a small wooden statue of Our Lady sold for a couple of hundred euro. There are people who do buy, particularly the older statues.” 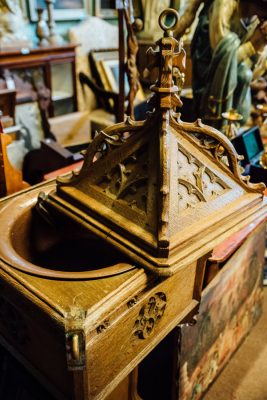 The church items were collected over a period of 30 years by someone who worked in the sales department of an ecclesiastical company. While travelling around Ireland’s religious institutions over the decades the collector took the opportunity to buy some items that were no longer required as Ireland’s churches and convents modernised following the reforms of Vatican II. The seller, who wants to remain anonymous for the auction, is now reducing the collection.

“Many of these items were used regularly in the Catholic Church before Vatican II,” said the collector. “With the changes brought about by the Second Vatican Council, the furnishings and vestments were simplified and many of these items were no longer used. However, today there are still churches in Ireland and abroad who celebrate the Tridentine Mass and only use Pre-Vatican II furnishings and vestments. We think that these pieces will be of special importance for them.”

Mr Mee told Catholicireland.net that some items came from convents, monasteries and other religious organisations’ buildings which were closing down and might have been lost.

Guide prices for the items range from €200–€800 for 19th century plaster statues of the Sacred Heart, saints and angels, to an estimated €1,000–€2,000 for the 19th century freestanding Gothic oak baptismal font with original copper bowl. There are a number of Stations of the Cross which are estimated to be worth €100–€600.