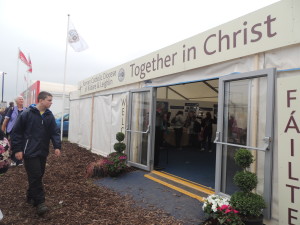 The new bishop of Kildare and Leighlin, Bishop Denis Nulty, attended the first day at the 82nd National Ploughing Championships at Ratheniska, Co Laois which lies within his diocese.

The Bishop, along with Catholic and Church of Ireland clergy and personnel, were present on a joint stand under the banner “Together in Christ”.

Bishop Nulty said he was very much “looking forward to meeting people at the Championships.”

President Michael D Higgins, who opened the event, which runs for three days in Co Laois, said the act of ploughing evoked the rich symbolism of renewal and fruitfulness.

“As we are facing into the next year with a renewed sense of optimism, I share the hope of everyone here that the sod we are turning over will deliver a bountiful harvest.”

Visitors to the event have been invited to gather each day at 12 noon and 3pm for some minutes of shared prayer at the joint Catholic and Church of Ireland stand.

Andrew Orr from Tullow Church of Ireland told CatholicIreland.net, “We have always had a joint stand at the ploughing championships. It is part of the witness that we are working together. Yet we have our separate space on the stand too.”

His comments were echoed by the Catholic priests on the stand who said it was great to have an ecumenical venture.

On Tuesday, it was a ‘meet and greet’ occasion for personnel of the diocese but sometimes it was hard to get a word in edgeways with so many children making a beeline for the vividly coloured  free wristbands printed with the words: ‘Together in Christ’.

There was also very brisk trade with prayer requests where people wrote petitions which will be sent to various religious communities over the coming weeks and months. 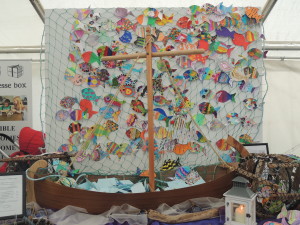 Children from all over the Diocese of Kildare and Leighlin had created a display of highly coloured of fish to decorate a replica of the Year of Faith logo with the ship and cross (see photo). The petitions were placed in a net within the display.

Also present on the stand was the Kraszkiewicz family with wife Sinead, husband Sebastian and baby Samuel.

They were promoting ‘the jesse box’ interactive bible stories set. This involves backdrops and figures to tell bible stories. The children can get busy assembling the ‘characters’ and backdrops while one of the parents can read the story and discuss its relevance in their daily lives.

“The family atmosphere is different when you are reading a bible story – it is different to television and video games. It also holds the children’s attention as they are listening and making (figures) at the same time,” Sebastian Kraszkiewicz told CatholicIreland.net.

Once the box set with figures, backdrops and story book is purchased other stories and figures can be accessed online and down loaded. 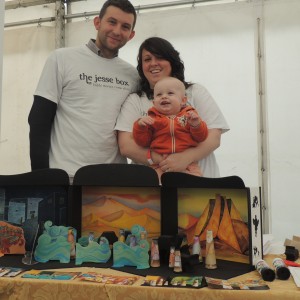 Sebastian Kraszkiewicz and his colleagues began working on the project three years ago and it was available at the International Eucharistic Congress last year.

It can also be used for first communion preparation with bible stories based around the Passover and the origins of the Eucharist.