Prayers and vigils for Filipino woman 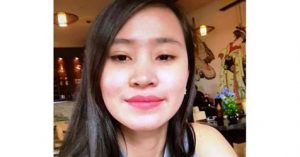 Prayers have been offered and vigils held in memory of Jastine Valdez and in support of her family. The 24-year-old Filipino student, an only child who lived in Enniskerry, Co. Wicklow, was murdered at the weekend.

In a statement Archbishop of Dublin, the Most Revd Dr Michael Jackson, said that the discovery of the body of Jastine Valdez, who had been missing from her home in Enniskerry since Saturday evening, had brought “to a tragic end a weekend of anguish and pain” for the young woman’s family and friends.

“Having been in the nearby parish on Sunday morning and heard of the worries of parishioners of Powerscourt and Kilbride for her, I would like to express my sadness at Jastine’s death. I also wish to voice the sympathy of the local Church of Ireland community to her family and all who loved her. May she rest in peace and may those who mourn her loss be comforted in their distress at this harrowing time,” he said.

Vigils were held in Enniskerry where Jastine Valdez lived with her parents, and the Institute of Technology Tallaght (ITT), which she attended. Sr Bernadette Purcell, who is a full-time chaplain at the college, has been in contact with the parents, who are naturalised Irish citizens, and has been supporting Jastine’s fellow students.

Speaking on RTÉ Radio 1, she said that Jastine Valdez was seeking to improve her prospects by studying accountancy and was a very diligent student and gentle person.

The chaplain said she had met the student: “I would have said hello to her and I always tried to practise my Filipino dialect with the students to make them feel more at home.”

Sr Bernadette had spent 17 years in the Philippines as a Presentation sister and was fluent in the language. She spoke in the Filipino language on the phone to Jastine Valdez’s mother, who was too upset to speak. Sr Bernadette planned to visit the parents in person. 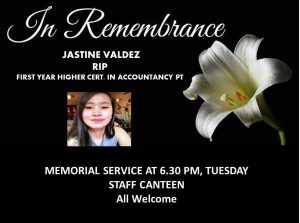 The students placed pictures of Jastine Valdez beside a candle and book of condolences for staff and students to sign. Her accountancy classmates prepared a simple remembrance service for their colleague.

Sr Bernadette said they were traumatised and shocked and needed to come together to share the sense of loss. “They are very very eager to do this for Jastine,” she said. As part of the service, they planned to play some of the Filipino songs that she loved, including Hindi Kita Malilimutan (We will not forget you).

Fr Rene Esoy, a Filipino priest who is well known to the Filipino community in Ireland, held a special service at the church where he is based, the Blessed Sacrament Church, Bachelors Walk, Dublin. He said: “As a Filipino community, we extend to the family our consolation over what happened to Jastine. This is a sad day for all of us Filipinos.”